I got time to sew this weekend. Everyone took naps Sat afternoon and instead of picking up and organizing my sewing room like I should have.... I decided I needed to sew. Ohhhh, I felt so much better after.

I had won the sailboat blocks at my guild meeting earlier this year and had 13 of them..... I made 2 more and will set them in a 3x5 pattern with the focus red star fabric as a little star for cornerstones. This will be a 'summer' quilt for AT, since he insists on being covered with his train and doggie quilts no matter how hot it is. I hope we can transition him to use this one in the summer instead.... but we'll see. Here are my 2 blocks. 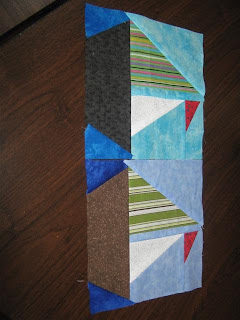 Well shoot, they tipped sideways again. Arrrgghhh I hate when that happens.
Since everyone was still sleeping I decided to do the ferry boat block that I had not done from last November's BOM. I just need to do the lighthouse block from the June BOM and all my 'guild' blocks will be complete for my quilt. I do want to add some more blocks to make it mine... but need to figure out how I am going to do them. It involves drafting and I am not an artist. We'll see if I can guilt DH into drawing something up for me.... he seems to have a hidden talent based on his chalk drawings on the driveway with the kids! 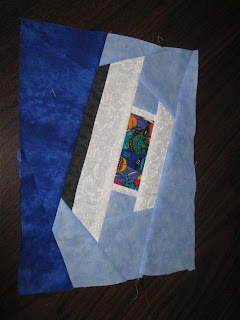