I think the cold the kids gave me is turning into a sinus infection so no motivation to do much of anything today. G is out picking up my prescription at the drug store. I broke down and went to see my doctor yesterday... with the 2 kids in tow. They actually did pretty well at both story time before and the hour I was at the doctors office. 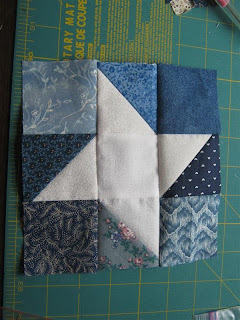 This might turn into a leader/ender project as I work on other things. I really need to start on Emily's twin bed quilt so it will get finished in time for when she needs it. We will probably be buying her a big girl bed in the next couple of months since her big brother got his shortly after his second birthday and she'll turn 2 in April. Wow, where has the time gone. Next Sunday... the big boy turns 3! It really doesn't feel like 3 years since I have earned a paycheck but I have loved being home with my kids and would not change a thing.

Maybe a bit of leftover Wonton soup for a late lunch and then make a few more of these blocks.
Have a happy Saturday.
Posted by Deb A at 1:39 PM 3 comments: 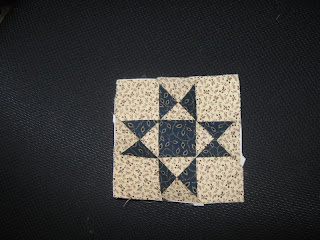 This was my redo of block 1 - Ohio Star - which turned out the 5 inches it should have. All my blocks so far are below. I do need to redo the red/white one to make it 5 inches....but I think I'll wait on that for a bit. 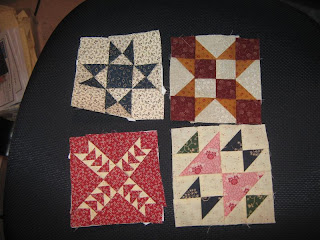 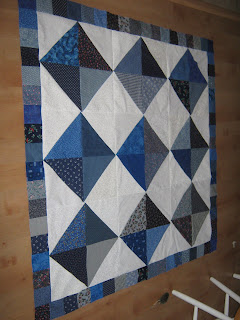 Soscrappy is having a scrappy Saturday this year and selecting colors to use up by month. January is blue... and I have lots of blue scraps that needed to find their way into something. I decided to sew up this quick quilt top the last few days. It finishes at 56x56 and will be donated to the charity quilts for my guild the Franklin County Quilter Guild once it is completed.
Head on over and check out what others have done with their blue scraps!
Posted by Deb A at 1:40 PM 6 comments:

It's been a long week. Kids had high temps Tuesday night until yesterday morning. One is pretty much better and the other has a bad cough now. The joys of Mommyhood!
I missed my guild meeting but was lucky my co-chair for the quilt show stepped up and updated the membership with the document I had created of our status. This was the BOM block I had done and will get to whomever won the blocks this month. This is from Quiltercache and is titled Double Windmill 2. 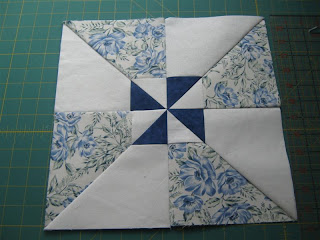 Yesterday there were lots of people in my house. The boiler started making noise Wednesday night - a squealing sound when it was on... and being in the single digits it was a loud night in the house. Called the gas company who sent someone and after an hour he diagnosed it but said a plumber was needed. Called a plumber and had a crew of 2 come in and turned out the boiler just needed some oil and it was all better. Had them fix a leaky valve and a few other things while they were here and everything was nice and quiet again. Did a load of laundry this morning in the basement. Went down to swap loads and my feet were all wet.... looked up and saw the opening of a hose pointing at me from behind the washer/dryer. Called the plumber... 'Yup, must have forgot to hook that back up. Sorry.' Arrrggghhh. I tried to clean it up but it's all under the washer and dryer so will wait for DH to get home to move them. Instead, I took the monsters... I mean kids outside and shoveled the driveway that had not been done since Tuesday. A little snow every day adds up and the kids needed the fresh air before we plummet into the below zero numbers for the next few days.

I needed some sewing therapy while the service men were here and kids were napping (how lucky was I for that to happen?) and grabbed the leftover bin of blue and white/cream scraps from my parents anniversary quilt last year and came up with this: 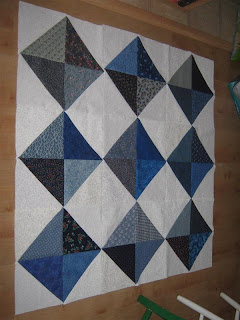 I had a bunch of 3.5 squares cut out already so those are being sewn into a border. Right now it measures 48x48. I think this will be a little baby/lap quilt that I'll donate to the guild charity quilts. It might get another border on the outside to make it a wee bit bigger.
After reading Bonnie Hunters blog, book and checking out the directions for her sisters choice quilt.. I grabbed a strip of blue/yellow out of the scrap bin and made this as I was piecing the above. Maybe there is a sisters quilt in my future? 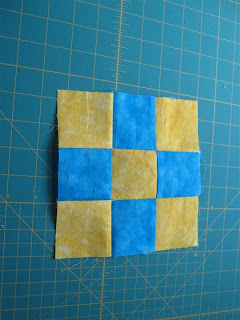 I still have this to work with from the leftovers of that blue and white quilt. A few ideas... but you'll have to come back and see what it turns into! 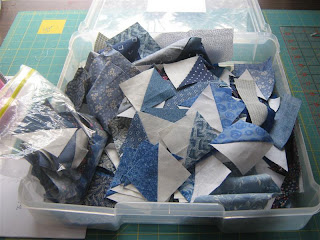 Scrappy Pinwheel blocks that I added a bunch to from my BOM winnings in November turned into this lovely quilt! I looked up the pattern by Kim Brackett and decided instead of a plain border fabric I wanted some 'mountains' to make the pinwheels stand out. 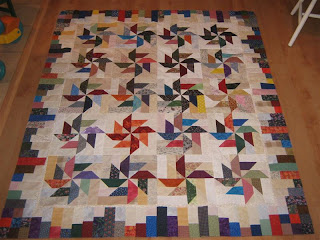 A close up of one of the corners. 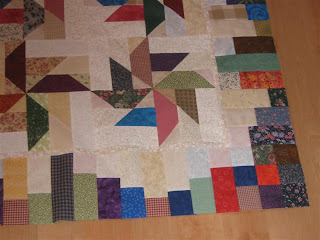 Over the weekend I finally got the Vermont cut out and onto the center of this quilt so that I can show the top at my guild meeting this Wednesday. This is 66x66 and I'm not sure how I will do the quilting on this one. Probably block by block decision and I'll just play with it. 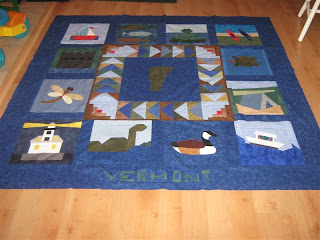 Typical me... at least 4 tops need to be quilted in the next few months and I pulled my extra blue's out of the bin from my parents anniversary quilt and have one set of the big 8 inch triangles all laid out for a small baby or lap quilt. More on that project coming on soscrappy Saturday!
Posted by Deb A at 2:03 PM 6 comments: 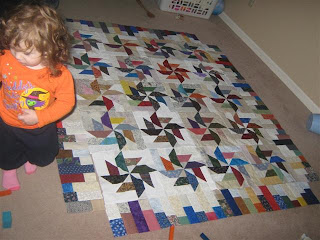 Well, this is the quilt on the messy floor right after Miss Emily got up from her nap on Saturday. I decided to do 9 squares for the 4 corners and attach them to the top and bottom borders. I brought the quilt and borders to my really fun sewing Sunday afternoon and the girls suggested a small frame border around the pinwheels before the border. I like their suggestion so will be adding that soon and then the borders to get this completed soon.
Yesterday a big Thanks to DH for staying home with the kids so I could pop to the hospital conference room to sew with some of the ladies from the guild. R and I were able to get a few of the award blocks done so I only have 7 or 8 total to do now! I figure it takes me a little over an hour to do one so the rest are very manageable to get done by the end of the month. Oh, there is a pattern for a version of the sugar house created by guild member Susan Bruce. The block in the link will finish at 15x15. The ones in the award are closer to 5x6 I think.
Still need to draft up my BOM quilt center....but plan to really get that done and onto the center of the quilt this week.
Just need to prep for a few meetings this week - do the taxes for VTMUG and file (hopefully today) and then create my agenda and organize my notes for my quilt show committee meeting on Thursday evening. Lets hope the kiddo's nap together and for a good amount of time again this week so I can get some things done.
Posted by Deb A at 7:51 AM No comments: 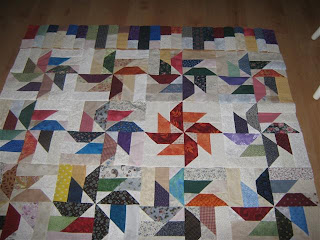 I have 2 of these borders completed.. just need to sew the other two together and figure out how I want the corners to look. Progress is being made so that is a good thing.

This is one of the award blocks for our quilt show. I have a bunch more to make and some are signed out to the guild members to make and return to me by the February meeting. I'm meeting with Roberta on Sunday to see if we can get a few more of them made up. I'd like to have the 13 kits I have all completed by the end of the month. Very pretty log cabins but they are all paper pieced and take some time to do. 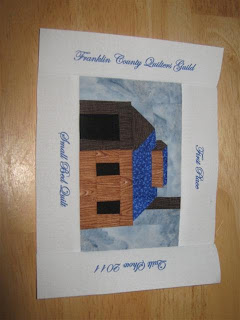 I did attempt to make a new years resolution to do something crafty every day and so far I've been doing pretty well with either sewing a little, cutting fabric out for my borders or doing a little knitting at night after the kids are in bed. As always, so many projects and not enough time in the day.
Posted by Deb A at 2:58 PM 1 comment: