With a little traveling this month I think I will pick an appliqué block or two to get completed for my One Monthly Goal. I have one completed (ok, the middle is done but the peels on the edges are not!), and 10 have been released in the 1857 Album Quilt  since January. I hope to have the first 3 blocks that were released in January completed by the end of March. Looks like the link is still available if you'd like to join in. She will be releasing the blocks over a span of 20 months... so plenty of time to join in. I am back basting these so I draw it on the back, including a line for the 10 inch block and the 10.5 inch block for cutting. 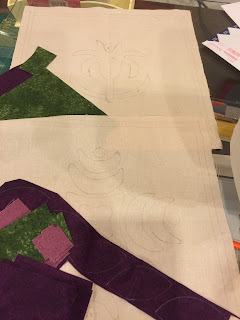 I decided to make mine in purples and greens rather than the red and green colors of the original quilt.
My first block looks like this. I used two pieces of freezer paper ironed together to make my circle and added it on - still not very round. 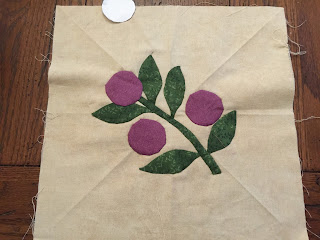 I'll add a picture on Friday... I'm sure I will be home with a sick child as my son popped a good fever and achey half way through a girl scout cookie booth (I had 2 moms running the booth while us leaders were with our sons!)
Linking up with OMG at redletterquilts.com.


I'm also attempting to finish a few of the ahem.... 22+ UFO's I have in the house so in keeping with the purple of the RSC Challenge this month I will pull out the Grandmothers Choice blocks and try and piece them into a top this month. Not sure it will happen as I start a new job on the 7th but at least the blocks will be taken out of the drawer and have a chance to see daylight. Who know's,  maybe it will become a top? 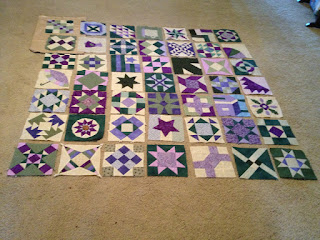 Those applique blocks are very pretty. I think I need to work with purples more often. Good luck with your OMG, the UFO and of course the new job!

Love the purple and green UFO sampler blocks! Great pattern. I have lots of UFOs, too.
Good luck in the new job : )

Good Luck with the new job! What will you be doing? I've always loved your Sisters Choice blocks. I am trying to tame the UFO's this year, but I don't have quite that many. I'm starting a Farm Girl Vintage Block of the Month, which is a change and will be a challenge for me.

Between your girl scout cookies / sick kids and all that you have going on daily I am amazed at what you get done! I do not miss the days when my kids were sick and I hope that yours conquers his virus asap.

Meanwhile, while I am doing 1857 in red and green, Purple and Green must be my next favorite combo since I did a twin sized bed one in that, a baby quilt in that, and the 1st three Benjamin Biggs blocks in that combo for a table runner as well! I just love that combination / will enjoy seeing yours grow.

I like your purple/green colour way. I don't feel so bad about my three UFOs after reading you have 22. Think I'll put my feet up and have a cupppa.

I want to work on my Grandmother's Choice project too! I love these blocks and they need to become a finished quilt!

I want to work on my Grandmother's Choice project too! I love these blocks and they need to become a finished quilt!