I did get my working hours in today (could not yesterday as the office was closed and I could not log on.). Grandma took the kids out today for a good 6 hours and the house was so peaceful! After work I decided to exercise the sewing machine. I had finished the machine quilting on the border yesterday but trimmed and attached the binding today. I'll be hand stitching that binding tonight. 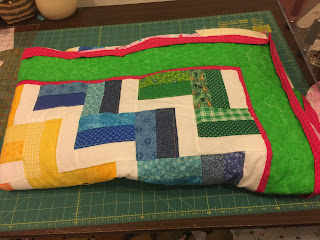 Then I prepped the fabrics for the last row of the 2016 RSC Challenge quilt. I hope to get it to a top stage tomorrow. Maybe quilted by the end of the year? 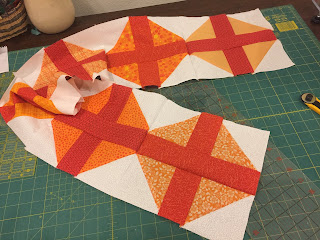 The kids were still not home so I pulled some light blue fabrics and cut the border for the 12th dresden plate block and got them sewn on. The kids arrived during this and promptly grabbed their basketballs and were shooting hoops. Poor Emily reached for her ball by the bushes and got a thorn bush... so some cold water and hugs to get her to stop crying happened in the middle of this last sewing. 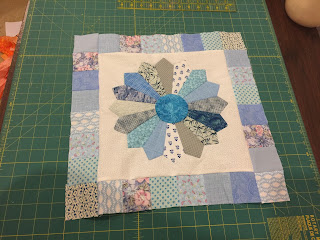 Greg has been making dinner - Emily's recipe for Saurbauten that has been marinating in the fridge for the last 6 days. It smells yummy so it's a good thing it is dinnertime!
Posted by Deb A at 5:10 PM

Must be the day to sew - finally! I got into my studio for a few hours. It feels good to return to needle and thread. ~Jeanne

You accomplished a lot in your child-free window of sewing opportunity!

Nice work. You always have such lovely projects on the go.

oh you had quite the productive afternoon! :)