I was on facebook yesterday and someone in the Celebrate Hand Quilting group mentioned there was a nine patch sew along - the idea being that you sew a nine patch a day in 2020! Do I need another sew along? Nope..... will I join in? Probably!

There is an RSC Challenge project that I started ages ago... and it has not made much progress. I think this is the year.... and this challenge might help me get it moving along and completed this year.
That is the hope anyway.....

I was making friendship stars using 2.5 inch squares. I seemed to have done purple and red. Another year I had the idea of adding a scrappy nine patch and was thinking of making a 12 inch block using 2 of each - 2 friendship and 2 nine patches. I found 8 light blue ones....... and I do believe the boo boo one did get fixed.  Hopefully this year I might make some progress by adding one (I'm going to count that friendship star as a nine patch... cause I can!) a day and see if maybe by the end of the year I'll have another scrappy quilt completed?

If you would like to join in - search in facebook for One Nine Patch a Day. I believe the group started over in Northern Europe. Over 100 people were added since the post on CHQ yesterday! Lots of great ideas being shared as well..... and so the squirrel projects begin! Now, technically is it a squirrel project if I incorporate a new idea into an existing UFO? Now to figure out where the heck those blocks are in the sewing room! I pulled in these photo's from previous blog posts =) 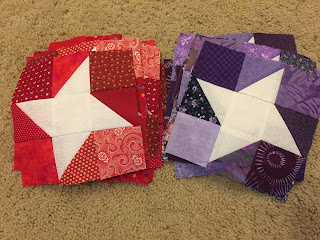 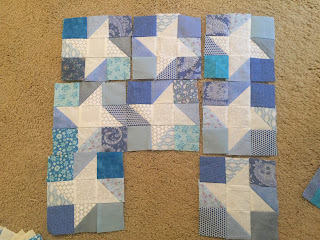 I do like your 'squirrel' project--I like the star block idea--I will try to make a couple and see if I want to make some for my color of the month--needed an idea for this Saturday to sew with green fabrics and they--like you said would look great with the 9 patches I made last Saturday!!!
love the blocks you have done so far--so keep them coming--
luv, di

OMG I sure do not need another sew along :)

I like these. I don't think I'd manage one a day, but I think a little friendship star work would help whittle down the scrap mountain.

Hooray for squirrels!! Projects, I mean. They keep our quilting interesting!

You've got a terrific headstart on the block-a-day project and what a great block to use up small scraps.