I got to roll the frame twice within one week! I just rolled it again on Wednesday and got to hand quilt for a bit after picking up one kid from scheduled early release.  So fun to know I am working on the last set of blocks - blues, pinks and dark greens are on this row. Let's hope it doesn't take a couple of years like the first row! 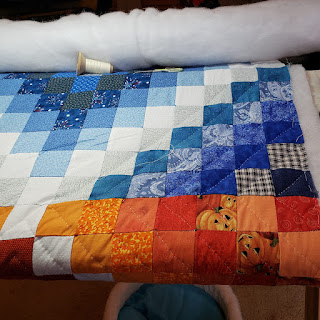 Does anyone else get sick of figuring out meals for the week? Just me? Really?
I think I had a successful one this week so far. Since we cancelled the scout meeting on Monday night...it gave us time to make the tamales! Boy - they are very time consuming! I did a pork butt in the crock pot as Carnitas. After I shredded it we made the tamales. Tuesday.... on the ride home the boy came up with the idea of Cubans. We stopped at Winn Dixie on the way home they have awesome cuban bread there. Picked up pickles too, and we had ham, swiss and carnitas and mustard at home. Used my pampered chef skillet with press and oh boy, those were yummy. I had half a head of cabbage that we shredded and made a vinegar slaw to go with it. Wednesday - Emily's meal (she didn't like the last 2 days... but did eat the shredded meat plain). Roasted veggie and italian sweet sausage pasta. Hmmm two more days of meals to deal with. Maybe baked fish tomorrow with sweet potato fries and a salad and Friday....pizza?
Posted by Deb A at 7:00 AM

I am really spoiled. When the girls are here their father cooks supper. He also packs lunches and orchestrates their breakfast.

I hate trying to figure out what to cook every day and hubby refuses to even ry to learn how. you did good in what you mentioned you all have had

Lovely log cabin finish in the last post, btw. And yes sometimes it's a drag figuring out what to eat each and every night. Especially now I'm aiming for more meatless meals. But it sounds like you did great this week.

Oh you must be getting excited to be "rolling" along so well...
that is a huge project...so pretty.
Hugs, Julierose

Congrats on the progress! All downhill from here. I hate coming up with meal ideas. But some days I just tell Tom to come up with something! He likes to fix meals and it works out as long as the both of us aren't in the kitchen together!