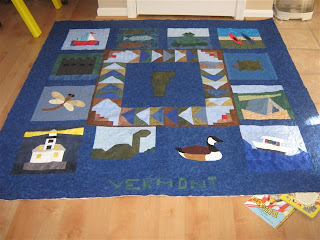 A few close ups of the quilting. I just did a medium meander on the quilt around the Vermont and in the blocks and sashings. I stitched in the ditch around the flying geese.... I haven't decided if I will leave them or do a little more quilting in there. 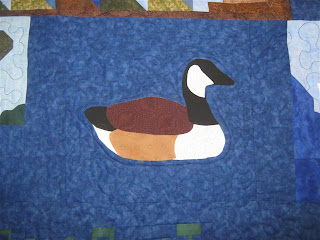 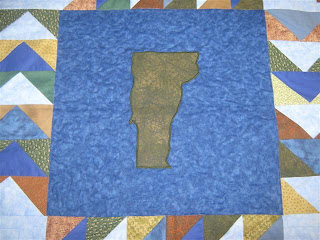 I was able to get this guy pinned Sunday and quilted during nap times Monday and Tuesday. The binding was made last week when I did the pinwheel quilt one but I haven't had a chance to put it on. I took the kids down to my parents on Wednesday for a visit... so no naps. Poor Daddy had cranky kids last night while I was at my guild meeting. Things are moving along nicely for the quilt show in April. Boy... that is coming up quickly! Now that I have these two quilts completed (or nearly done) I can concentrate on finishing the ribbon award blocks. I need to prep them for the final part - a quick baste of the ribbon and then getting the quilt sandwich ready for the sewing around, turning which I was told is a real pain and then fusing them closed. I have 2 and a half left to make and then about 13 to 15 to finish. That is what I will be working on for the rest of this month. I hope to have these done by the end of the month and that just leaves me with a little minor sewing on some black drapes for hanging in back of the quilts at the show. That should just be an hour or two project that will get done in March.
I might sneak in a little bit of 'me' sewing on UFO's... but really need to make a dent in the awards first.
Time to clean up after some messy kids and their pancake and syrup.
Happy Quilting.
Posted by Deb A at 9:46 AM

Love your Vermont quilt! My family and I visited 2 summers ago on an Up North vacation. The trip's highlights were Vermont Country Store and Ben and Jerry's.