It was an early start to the morning as I heard little voices making noise at 5:33 AM. It seems Emily went into Aidan's room and got into bed with him for a 'sleepover'. He was under the covers at the top of the bed and Emily was under his covers with her pillow at the bottom of the bed. Aidan has been going in and waking her up during the week so I guess this was payback. I did warn Grandma they were up at the crack of dawn when I dropped them off.

After dropping off the kids I did a little sewing on some homespun red/tan nine patches. I now have 12 of 39 done. Then I took a little break and threw in some laundry and then ran the steam cleaner over the living room carpet. Boy, you don't realize how dirty the carpet is until you do that! I also made a quick banana bread - I had three banana's that were getting really mushy.
Back to the sewing room - I managed to get the blue/brown irish chain all quilted. I must say I like the simple straight stitches through the chains on this one. They were really easy too! I decided to go with a solid blue binding and made that and attached it to the top of the quilt. I remembered to pop a 10 inch square folded in half on the back so I have a label all set to write up. Yea me! 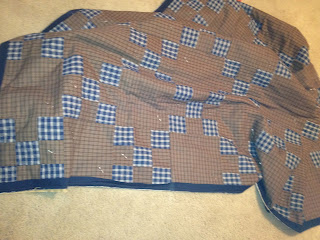 After a quick lunch - it was back to the sewing room and work on Midget block #63. It has three parts of paper piecing with eight wedges on each part. I have this one all sewn except for the two parts that need to get appliqued. It should be done for a Tuesday reveal. 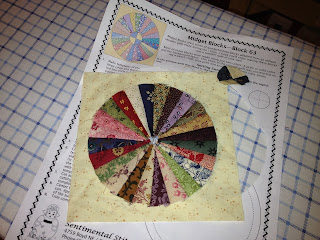 That leaves me with a little bit of applique to work on in the car tomorrow on the way to SeaWorld with the kids for their Halloween Spooktacular. That will be the kids trick or treating fun for the year. I have a feeling the quilt will stay at home for working on in the evenings in front of the tv since it might be a little hot with that on me in the car.
Head on over to SoScrappy and see what other brown projects were worked on today.

Glad you enjoyed your kid free day. Your quilt looks great. Amazing how quickly you got it all together. Enjoy your Sea World trip tomorrow. Hope Shamu has lots of candy to share.

It sounds like an amazing and tiring day! You accomplished LOTS! Have fun at SeaWorld tomorrow - a quilt in the car on my lap would feel good here. It was 28 degrees when I got up! ~Jeanne

You always seem to get so much done. Enjoy Sea World, I remember taking Andrew when he was about 3, he loved it.

Have a wonderful and Blessed day
kristie

You were able to accomplish quite a bit today - and who makes a "quick" banana bread? LOL* ;) Jealous here. Lol* Love the midgit block - that is ADORABLE!

The solid blue binding looks great on your blue/brown Irish chain. The mini is gorgeous too!

Wow what a busy day - really like brown and blue together - very nice!