Slow Sunday..... on a holiday weekend.

We are celebrating Labor Day here in the USA. That means Monday is a holiday!

Today.. the kids finally just left for Grandma's house around 10AM. I get a couple of hours of peace and quiet with no one in the house! I think I will pop out and attempt to reclaim a little bit of the garden area this morning before the feels like is over 100 degrees. I have ignored it since April when it got hot. Yup - I excel at growing weeds and grass! Time to tame it and attempt a fall crop of cooler weather things.... or you know, what I used to grow up in Vermont in the summer!

Saturday was spent tackling the front yard in the morning. I finished weeding some beds that I started a few weeks ago and got out the hedge trimmer and let Aidan play with it. All the front shrubs got a buzz cut and it looks much better now. I just need to go get some flowers to put into the front beds for the fall and winter months...  probably tomorrow with the kids. After 3 hours in the heat working..... I was pretty much done for. I did also hit a grocery store, played a family game of Pictionary and then made some Korean Chicken wings -recipe from America's Test Kitchen. I did a double batch... so over an hour working in the dutch oven deep fryer for all the chicken wings and legs in batches. Boy were they yummy and crunchy! I opted out of the drive in last night like I was thinking.... I was tired. I'll try tonight with the kids and will go see Hotel Transylvania 3. They saw it in the theater with Grandma.... the other option on the other screen is Christopher Robin.. which they also saw with Grandma.  A late night for them as it doesn't start until 8:20 when it gets dark. Good thing they can sleep in tomorrow.

I got a heart hand quilted this morning while sitting in my recliner. 30 blocks of 63 done. I got the blue one done on the left and moved it to the sunny yellow one for this afternoon. I noticed a heart that needs a little 'fixing' as the applique thread must have been cut somehow.  I'll also need to figure out how to do the blocks around the edge.... any ideas? I might just go hoopless on those....? 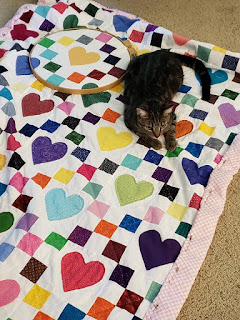 I also did a pink one in the car line waiting on the kids at school this week. I push the driver seat way back so I can quilt! 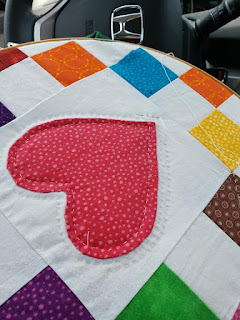 Linking up with the other Slow Sunday Stitchers today. Time to throw on some clothes and head out into the heat. Hopefully the bear that had a feast on our garbage last night is long gone... he found the wing tips we cut off for his midnight snack followed up by some girl scout cookies that had gone stale and were in the trash.

sounds like a better garbage can is needed, we had things attacking our garbage can and Mike attached a tight bungee cord over the top so it is held tight - hope the bear doesn't come back now that he knows where the food is!!

Lovely heart quilt...it has been a bit cooler here, but still humid...and we hear that the Mr. Heat will be turned back on starting tonight--temps in upper 90's--really hot Summer for here!!!
I don't garden anymore--trying to plant up beds with low maintenance shrubs...but they are burning from lack of rain...disappointing...
Hugs and Happy Labor (-less ;)) ) Day. Julierose

Great progress on your heart quilt. I attach a dish towel to the edge of my quilt with safety pins and then put it in the hoop to quilt the edges. Enjoy your peaceful stitching!

I usually hand baste (with large stitches) a strip of fabric or a tea towel to the edge of the quilt so you can still use the hoop. From time to time I ponder buying a half hoop, but this system works well too!
Enjoy your slow stitching today!

We love America's Test Kitchen and actually bought two of their cookbooks. One of them we call the door-stop because it's so heavy! Everything we have tried to make has tasted as good as what you could order in a restaurant. Tomorrow night we are making their Chinese Barbequed Pork...yum!

We have the book of the first 11 seasons and the dvd. The french onion soup is awesome! Hmmm I think we need to do the high roast chicken over potato again soon too!

Nice scrappy heart quilt, obviously cat approved! I have been working on taming our weeds all summer...