Ok, somehow I got the numbering wrong. Oops... I blame the stress of moving and me just not paying attention.
I slacked off again Monday on the unpacking and with Jo's teaser of 9 patches and 4 patches... I worked ahead on Monday during nap time and did a few more blocks. I have not found the square ruler so these are not cut down to size yet. 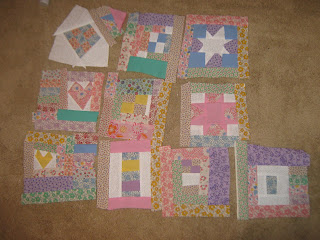 All of mine so far... the white really stands out in the photo but not in real life. I think I might sash with a solid 30's color and white cornerstones..... just a thought right now though. 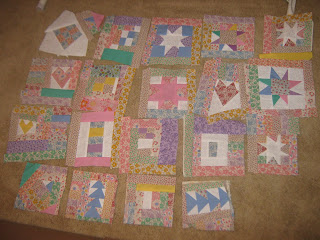 Today was our first visit to the local library for story time. We got there a couple of minutes late but quietly went in and sat down. The kids joined in the clapping when the book was done and had a great time singing along to the songs. The librarian came up to me later and commented on how she enjoyed how the kids interacted during the stories and singing. I told her they are old pro's, especially Aidan as he has been going to story time since he was 6 weeks old! After the books they had tons of toys and crafts there for the kids to play with and interact with each other. After 1.5 hours I had to bribe them to get them home for lunch. I also chatted with a few of the Moms and now have some tips on pediatricians to follow up on. I really need to set up their doctor this week so I have someone in place with their records on hand. You just never know what will happen with a 3 and 2 year old in the house!
Posted by Deb A at 6:18 PM

Your crumbs are looking great!! Love the star with the white background.

I love crumb blocks - they are so freeing! Your's look great.

I love your colors! Great crumbs, aren't they fun?

Love them. and I like the idea of the sashing. Maybe that is what I need to do to mine as well. My husband said all together it looked like a jumbled mess....um....thanks.....was all I said!!!

Have a great weekend!!

I love your very pretty version of this project!