Today was a pumpkin day for me.
Monday night was a Daddy free night as he went to Orlando to stay overnight in preparation for a test he had on Tuesday.... which he passed! Yea! I decided the kids needed something special (and hopefully something to tire them out so they would go to bed good for me!) and there is a little pumpkin patch at a church that we go by every day on the way to Aidan's school. This is a new concept for me... I'm used to going out in the pumpkin fields and picking a pumpkin up in Vermont. Here they had pumpkins out on pallets. There were some strange varieties - I wish I had taken some pictures. I think I will go get a few more of the pie pumpkins so will snap some pics then. The bumpy red ones and the white with green ones intrigued me. 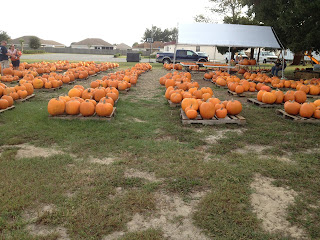 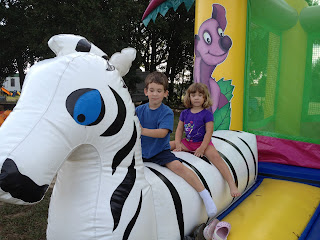 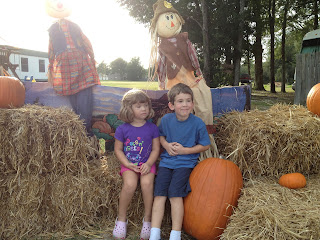 The result - the kids got two small pumpkins which they put some stickers on. Can you tell which one was done by the 4 year old and which by the 3 year old? 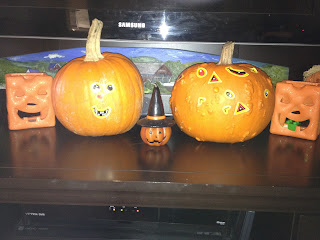 We got 2 baby ones for decoration to go with the gourds we picked up at the fruit stand. 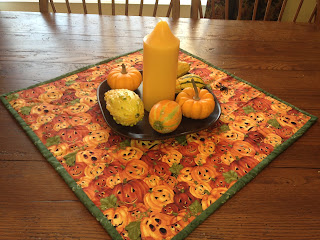 I got 4 pie pumpkins. That brings me to my pumpkin day. I started with these.... 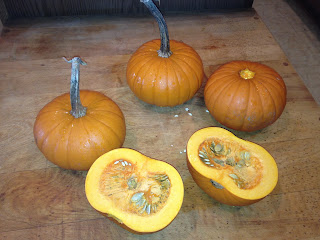 and put two in the oven to bake and two in the microwave. I am trying to decide which way I prefer. Next it was puree them - I just love my little immersion blender - and then freeze some and bake some. The little bit extra will either be added into something for dinner as a disguise or made into a small pumpkin soup and see if the kids will eat it.

The kids had a choice - pumpkin moose (Aidan's favorite!), pumpkin bread or muffins or pumpkin bars. We decided on something new - pumpkin bars with a cream cheese frosting. I found it in my Blue Cross and Blue Shield of Vermont Employees Cookbook and the recipe was from my old boss back in the 90's! Thanks Chris Schuft. 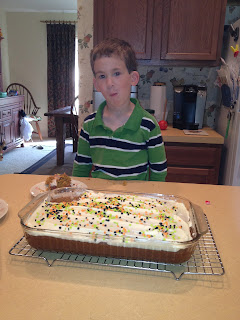 Someone just had to have one right after frosting them! He put the sprinkles on and then ate all the frosting off his piece. No denying it, he is my son! These are really moist and yummy. I know I'll have another piece or two after bowling tonight. There it pumpkin in it so it's healthy..... right?

Of course... I sifted through the pumpkin guts and fished out the seeds. I tried a new recipe where you boil the seeds for 10 minutes in salted water and then roast them in the oven. Yummy! I think I need to get more pumpkins just so I can make more pumpkin seeds..... or hide them from the kids so I can eat them all!

How was your day?

Great pictures :)
I didn't know how to cook pumpkin seeds. I've been throwing them away.

Ohhh, I'm getting hungry for pumpkin!!! Pumpkin bars and pumpkin seeds sound so good! Glad you all enjoyed the pumpkin patch - we have fields in Illinois but some places pick the pumpkins for you to chose. ~Jeanne

Wow, Deb, I'm almost weepy with nostalgia reading your lovely post. Searching for Pumpkins was always a fun outing to do with my kids and grandkids.
Those pumpkin bars sound delish. Any chance for a recipe sometime?
BTW... there are special pumpkins that one uses for pies and such? How do you tell the diff? I'm clueless... I get my pumpkin from cans. lol

Lovely photos. sounds like a great outing. We have Pumpkinfest on the first weekend in October in our small town. The whole place is decked out in pumpkins. Our grandsons are coming for a visit next weekend and we will go to see what we can find in the pumpkin patch. I find the white "ghost" pumpkins interesting. Also need to get my pie pumpkin cooked and the results frozen for use over the winter. Joanne

Looks like you all had a lovely time! Your kids will always remember this

Have a wonderful and Blessed day
Kristie