So I got up and decided to try and catch up a bit on Easy Street. I cut out 145 green squares to finish off step 4. I had pieced the geese units together last week. 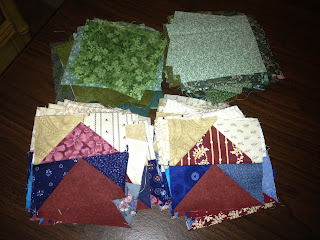 Then I cut out the 3.5 inch blue squares - I had a stack already sitting that were leftover from the anniversary quilt a few years ago so I only had to cut out half of what was needed. That was a nice bonus. Now I need to cut the 128 maroon squares to go with that step so I can sew them up later this week. 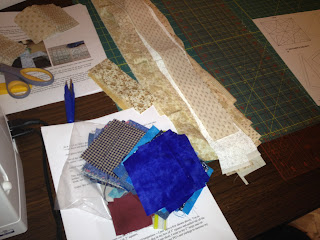 Then I cut some cream strips for step 6. At that point it is 5AM and the girl was making noise so I had to go cover her up and get her settled in again. I figured I should vacate the room next to hers so I decided to update the blog.

I also have been plugging away on a baby quilt for Aidan's teacher. She is due January 9 (cutting it close I know!) and hopefully she will be in on Wednesday when he goes back to school.... and the quilt will be done! It is a top. The back is pieced. The binding is made. I just need to pin it and do some quick quilting on it later this afternoon after  work. I see some binding stitching in my future tonight and tomorrow. I'm wishing I took the hubby's advice and finished the pink chain part in the side and top border.... but it is done and I'm not changing it now. The binding will be the pink and the backing is a green polka dot with monkey's. 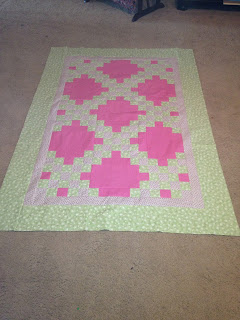 Once that is done, I am jumping back to the Easy Street mystery. She posted step 7 this morning and yikes.... it looks like the last step is tomorrow! Of course... I need to get a midget done, a Quilt Square Along Block and I'm behind on the Sufferage BOW..... and I need to prep some hand work for next week. Oh well, as long as the baby quilt is done by Wednesday and I have something to work on while I am away I'll be happy. I think I just bumped up prep of some Orange Peels after this baby quilt is done.
Posted by Deb A at 5:25 PM

You have been busy, girl. Sweet baby quilt.
Yes. I saw the Easy Street winds up tomorrow! Wow. It may take me a few weeks to pull it all together. haha :)

Busy, busy, busy - so much to do and so little time!

The baby quilt looks very sweet. I am sure she will love it.

You got a lot accomplished instead of sleeping!! LOL

I can't wait to see your finished top ... it's a beautiful quilt that Bonnie's designed.

That baby quilt is so sweet ... hope that the baby will wait until Wednesday. ;-)

Hope you had an enjoyable New Year's Eve and that you'll have a wonderful 2013!