The kids were looking through my quilting books a few months ago and both decided they wanted to make quilts. They each picked one out. Since Emily will be helping (laying out fabrics and determining how it looks) with the 60 degree triangle one this month, it was time to humor the boy and let him pick out his fabrics. We headed to the store on Saturday night to run a bunch of errands. 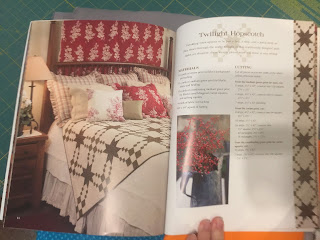 He picked out a quilt pattern by Kim Diehl called Twilight Hopscotch but wanted to have it done in teal and orange. 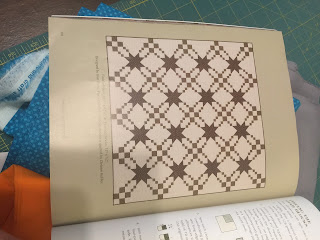 The big decision was what to use as the background color. He didn't like the white or cream ('it's too bright mom!'), I suggested black and he nixed that idea - 'too dark Mom!'. I pointed him to the grey..... he liked a light one but decided it was too light and instead picked a medium shade. He is quite happy with his choices.  He has decided the stars and the big squares will be teal and the little squares orange with grey as the background. I suggested the background be teal but he was having nothing to do with that choice! 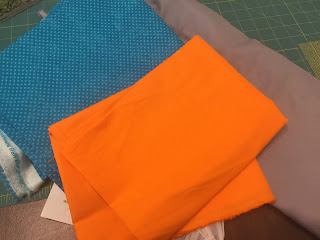 When asked how long it will take him - he responded, a couple of years I think!.
So glad he realizes it will not be done tomorrow!

Best to get them hooked while they are young! ;)

Good for them! Kids like what they like and when finished they will have the results of their own efforts. You are a good mum to encourage and suppport them so.

So fun to see him get excited about it. It might take a few years, so glad he's not in a hurry.

Glad he was able to pick the fabrics - he'll own this project now! Hope it doesn't take the full two years!!! ~Jeanne