I pulled out the 16 patch blocks that I made over the last year or two with the RSC Challenge. I have a good amount of them.... and was thinking of doing another version of my cubed quilt with grey as the background..... I do have 25 blocks... which is what I used in the below quilt..... 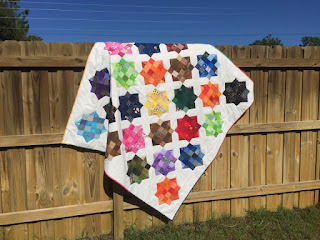 But I am in a mode to sew them up and clear them out. It takes a little more thinking to make the alternate block for that pattern (and a clean floor to lay them out on!) and I am not in thinking/creative mode with a couple of deadlines approaching in the next month at work. I think instead I will make them into stars and have them ready to donate next year to the Hands 2 Help cause..... or locally if something comes up before then. I have made a couple of these and love how they look. This one I get to see at my MIL's as it went to Papa Andy. It has a nice snuggly fleece backing. I like this look....so will probably do the squares on the edge of the blocks for one of them... maybe both! 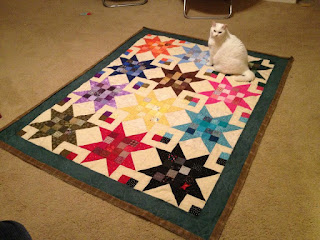 This one I just did a plain square in the corner of the star block.... I don't remember where this one ended up. It might be somewhere in my house! 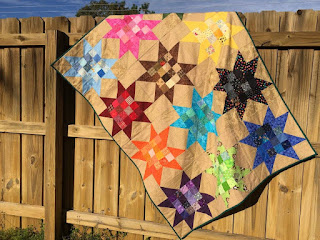 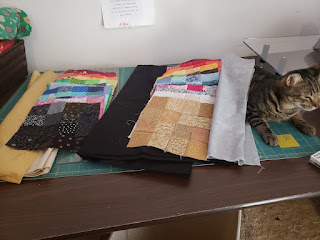 I sorted and pulled some backgrounds. I think the tan will look good with the set on the left. I was thinking black or grey for the group on the right. I think the black won when I laid it out. Yes, Peanut stayed there and would not move so I just put them on top of him. He likes to be covered!

The most difficult part when you have generic blocks - figuring out what to do with them! I have a plan now.... so I can start sewing these into bigger star blocks.

Linking up on Saturday with the RSC Challenge.  Who knows... I might have some stars made by then!
Posted by Deb A at 10:01 AM

Love that top quilt. What is a RSC challenge and where is it? Duh, never mind I just saw it in your sidebar.

I really like them all! I always wondered how the cubed quilt was put together looks complicated!

I love these blocks. I especially like the top quilt, but can't imagine doing the alternate blocks. I'm doing 16 patch scrappy blocks as well, but no specific color. I'm planning to do a Sunny Lanes quilt with them. http://www.quilterscache.com/S/SunnyLanesBlock.html

I love 16 patch blocks, and all the things you can do with them! They make such great star centers, and it looks like they work with any background color, too.

I love the Scrap Jar stars - and that tan background is going to make such a lovely warm quilt! The black background will make the stars pop and sparkle. So, two winners!

Beautiful quilts! I love the one with tan background, great color. Have fun with those blocks!

Perfect use of your RSC 16-Patch blocks, Deb! Happy quilting!

It always feels great to use up lots of basics -- they are so handy to have on hand and work into great quilts so fast. Looking fabulous.