Another day.... and no, I did not manage to do what I had planned. They day is not over yet though, so maybe tonight? We will see.

I started off the day dropping the kids to school and had a parent that was to pick up their cookies for their daughter at 9:30. They arrived a bit after 10 and once that was transferred I realized I missed 6 boxes, their cards, envelope and 4 for 4 stack. I was heading out so dropped it to their house on the way to deliver some of Emily's orders to bowling. I opted not to bowl this year as I was not seeing people wearing masks back in May and not knowing how things were going and Greg's back I opted to take the year off. It was a good thing I did as it allowed me to work on Thursdays when I needed to bring Greg to doctor appointments and flexibility is nice. I walked in with my mask on and only the person I was delivering to had a mask on! These are older ladies (age 65+). After a little chat I headed off and decided to stop at Target to look for heart jr mints. There were none to be found but... I believe I was called a rude name for having a mask on by a 3 year old on the way in and then the nice lady at the door was handing out masks and reminding people masks were required in the store. The lady with the child say no thanks and walked on by! Almost everyone else in the store was wearing their mask. I was in and out of there. A quick stop at Joanns - masks on people thank goodness. Then a quick CVS stop to get a couple things for the kids and back home. 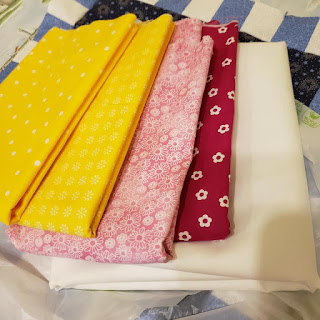 My fabrics from Joanns. Adding some yellow and pinks and white fabric for the flowering snowball blocks.

All I can do is shake my head at the people who just won't wear a mask.

A quick lunch at home and then I was not in the mood to pin my quilt so I pulled the hand pieced quilt along quilt out and added some quilting while watching an episode of Brigerton on Netflix. 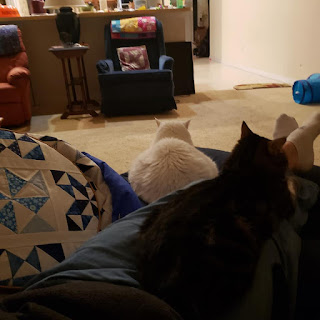 This was as far as I got last night before my lap was claimed. 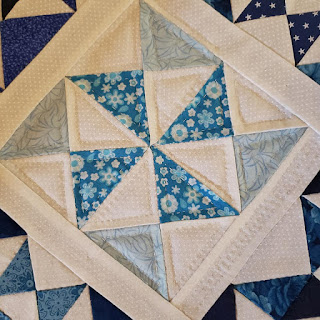 I got the block finished off today.

Pick up the kids from school (20 minutes there, waiting time then 20 minutes home makes for a good hour) then a mixed up dinner (kielbassa, leftover mashed potato, leftover sweet potato fries and salad).

I just downloaded a new audiobook so it is walk time before it gets dark and then maybe pinning time?

That was quite a full day for you!! I can only say
"You've got to be young"--;)))
Pretty new fabrics you picked up...we are not yet going into any stores
except grocery once every 2-3 weeks...during early SR. hours...

I cannot wait for April 2nd to get our 2nd shot...seems like an awfully long time...
hugs, Julierose

we will be so glad to get our vaccines and can't even sign up to make an appointment until April 1st. We do so little just run to grocery shopping, doctors, and Lowes' it seems most wear masks but not all. Wal-Mart now has someone at the entrance holding a box of masks asking people to please put on a mask if they do not bring one in with them but still some do not or do not cover their nose. Most times it is just one quick trip to the store - trying so hard to not get sick and some just do not care

Some days just totally derail our plans, Deb. You aren't alone, Deb. I had "one of those days" yesterday, as well.

Yes, I am constantly saddened by the people who just will not wear masks. At least while at school I have the right to make the kids do the right thing. I wish that we could all go back to normal, but I am willing to do my part to keep people healthy until then. Another teacher at our school has it, and one more is out quarantined with a sick child. My own students are just opting to stay home out of fear. If only it hadn't become such a political issue! Grocery store pickup has been real winner for me. If I am going to get sick, I would rather be doing something more exciting than buying food. The hand quilting looks great! It always adds such nice texture to the blocks

I'm sorry you encounter so many people without masks. It's such a simple thing we can do to keep each other safe! You definitely deserved some slow stitching and kitty cuddles after that day. Hugs!

I’m so glad this little corner of the world is on the side of masks! We sadly live in an area where many do not wear masks, and it has been hard.