I had 30 minutes to sew once I got the cats home from the vet and before going to pick up Em. I got Block #50 - Autograph done. I had cut out everything for #49 yesterday as it is a hand pieced one but I think I traced on the back of the fabric instead of the front, since it is just not looking right when I attempted to put it together. I'll recut enough for one of the four parts later tonight or tomorrow and see if I can figure it out. 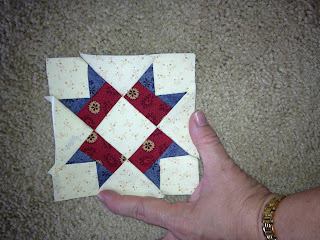 This is the gully washer we got yesterday right at nap time.... so I did not get to sew as I was with a very frightened child who does not like thunderstorms. We got 2.32 inches of rain in one hour and got a bit of a lake in our front yard. The tree is probably 50 feet from the road so we had a good amount of water in that area and over the bottom of the driveway. Once the thunder stopped and the sun came out..... the kids put on their boots and were walking around in it away from the road. Lets just say... the water was slopping into their boots it was so high! The joys of childhood - I think they had more fun doing that than swimming around in the pool that morning! Since no nap boy was so cranky I would not take them to the pajama story time last night and once he got over that (about an hour of whining and crying) and I suggested we do our own story time at home - we had a fun program. Crafts - made stars and moons and taped to the walls. Some poems from Shel Silversteen - Where the Sidewalk Ends and then I read them 'The Quiltmakers Gift'. Then it was song time and we went around the house to The wheels on the Bus and then the Hokey Pokey (Dad walked in from work while that was going on - he just smiled!) and then we finished with Trixie who is dog (a really weird book!) and The cat in the hat by Dr. Suess. Then we made popcorn for their bedtime snack. All in all, a good evening with the kids. Oh - and all that water was completely soaked in by 8PM that evening. 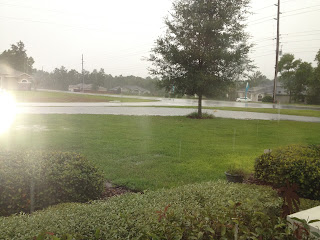 Number 49 was a weird block. It would be easy to get the pieces upside down. Autograph looks great though. Glad you found at least a little time to sew. It has been rainy around here as well, though I haven't done nearly as much to keep the kids entertained. It does get easier as they get bigger and more independent, at least as far as keeping eyes on them.

Great block - I love the fabrics you have used. Sounds like lots of fun going on at your house. I miss those days when my boys were young!