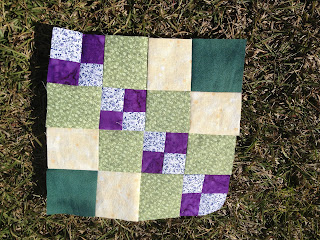 I had a craving for onion rings.... and had purchased a sweet Florida onion at the veggie stand last week. Well, today I made onion rings to go with lunch. They were yummy.... but now the house smells like frying oil. I am lucky and have the windows open to air it out with the fan's on  (66 degrees here). Any ideas on how to get rid of that smell? I have heard of burning vanilla candles but would love to hear other ideas and tips that have worked for you.
Emmy and I did a Sam's club run yesterday while Aidan was at school..... I grabbed a Good Humor box of ice cream varieties. Emmy tried the Sunday cone today... I think she got more on her than in her! 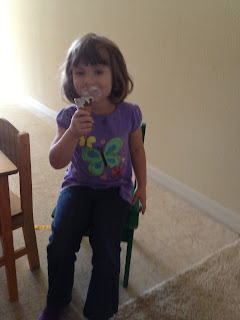 I think a dish of white vinegar is supposed to absorb some of those odors. Also wiping down counters/stove with vinegar water might help too. At least you can have the house open! Good Luck! ~Jeanne

I usually just burn a scented candle. Something about that seems to get rid of the cooking odors, not just cover them up. My favorites are Yankee Candle, because their scents actually last through the life of the candle!

That looks like a fun block to sew...can't wait to catch up! Love your new header photo!

I love that block ... so simple, but so gorgeous. I suspect that opening the windows is your best bet for airing out the scent.