I was working on my appliqué last night at girl scouts with Emily and finished it off this morning.  The pattern shows some embroidery stitch work in the brown of some daisy knots and in the leaves to add a stem line and a little line outside the brown center. Those might get added at some point. As I was sorting through my fabrics I found a bunch of rainbow solids in mostly 30's colors. I need about 2 yards to border all these little squares so I am deciding if I will use multiple colors, just a single one of yellow which I have a lot of or alternate yellow and blues...... Maybe yellow surround and then sashing of a blue to look like a window pane?  Lots of time to decide but I would like to start sashing these as I finish the blocks to make it that much easier to finish it later. 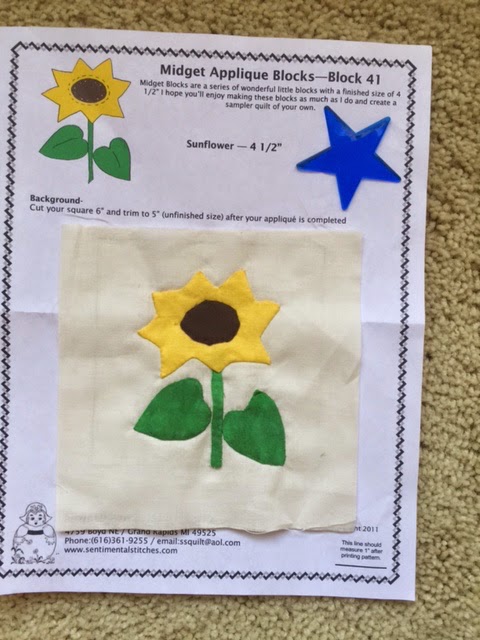 I also have most of clue #3 done for the crochet mystery. Clue three had two parts. I did part A in cream this weekend and part B is going to be the dark country blue. I only have a couple done but they go pretty fast as they are mostly chain stitches. I should have all 20 of them done later today or tomorrow just in time to start clue #4 which will be released mid morning today. 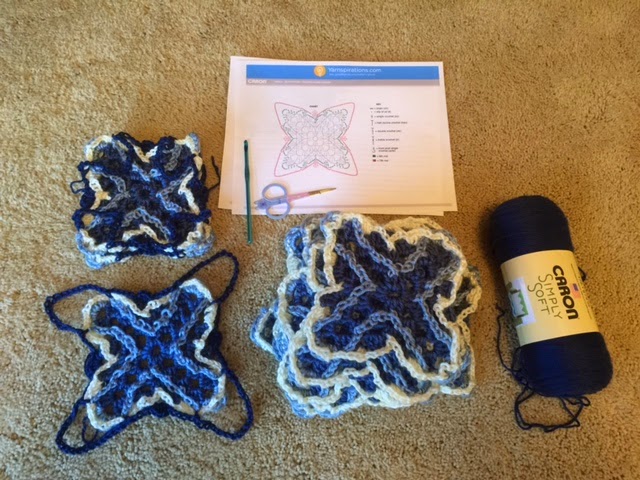 Looks like the fog has burnt off so time to go for my walk this morning.

Thanks for sharing your little sunflower this am, so gloomy here it is nice to see something bright and cheerful!

Get in a little walk for me, please? I love your tiny little blocks ... and this week's is no exception.

What a sweet sunflower and crochet surprise is just that!