Well, the wedding couch throw is sewn into rows... just need to iron the rows and sew them together into a top. So handy to have these birds in the air blocks sitting there from a past RSC Challenge. The setting will have it be 60x72 right now and I am seriously thinking of adding a cream 5 inch border around it and then adding a little appliqué vine and a few flowers on two of the corners. Thinking a scrappy binding.... that would bring it up to 70x82 for a little bigger snuggly quilt. 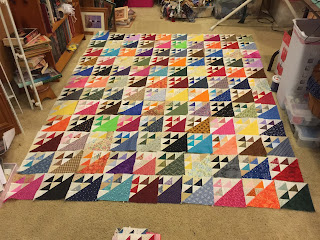 Unfortunately... I had hoped to make this and hand quilt in a baptist fan pattern.....time will not allow on this one but since I had some blocks left (a bunch of pink!).. I calculated colors and number of blocks needed for a 14x14 layout.
I made a little progress on the maroon trip around the world block. This will eventually finish at 30x30. I have to pull and prep my squares from the white round out but hope to have this one done by the end of the month. Maybe a completed block will be shown next Saturday? 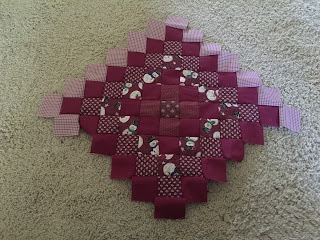 Linking up with Angela over at the RSC Challenge.

Yesterday we went to Lecanto HS with Grandma to see the Tampa Tiki Drummers. They put on a great performance and the best part - it was free as part of the library summer programs. After that Grandma took us to the Chinese buffet (Emily's favorite!). The kids were really good at the performance and restaurant. Between too many desserts and being excited about a beach trip someone was a pill and pushed ALL my buttons for 4 hours yesterday (3PM-7 when Greg got home to take over). Yup - I actually opened a bottle of wine ( such a wine drinker I am the bottle had been sitting unopened in the fridge for 2 months!).  This boy below was the culprit. He was probably a little annoyed because Ms. Emily was scheduled to have a tent out with Daddy last night but got rained out. Silly me said the living room was big enough to put up Daddy's tent.... so that is where they were. The tired boy is even more tired this morning as he was up way too late trying to get into the tent. He tried it for 30 minutes but could not fall asleep so Dad sent him back to his room around 9:30. Then..... why does the highest fire alarm on the cathedral ceiling always start beeping in the middle of the night? It finally got changed this morning with the 16 foot ladder.... so pretty much no one in the house got any sleep last night. Kids are off to Grandmas for a few hours. I'll be running errands and I think everyone needs a nap this afternoon. (and if I can't nap I'll be shut up in the sewing room pressing those rows and sewing them together!). Lets hope I remember to shut the rotary cutter so I don't cut myself like I did yesterday. A nice Doc McStuffins band aid is on my ring finger on the left hand to make the boo boo all better. Those blades are sharp!

Labels: birds in the air, Trip Around the World

It's looking wonderful! I think an applique border would be pretty, but either way, it's a great gift!

I love the wedding quilt - an appliquéd border will only add more beauty! I do hate those nights that no one gets sleep in the house. Hope you all find nap time today. ~Jeanne

60 x 72 is a decent size for snuggle quilt. Consider your time constraint and call that gorgeous puppy DONE!!

Your Birds in the Air keeps catching my eye! It will be a great cuddle quilt. Love the maroon TATW too!

Your rainbow blocks look great without the border. I am sure will be amazing with a border.

The Wedding Quilt is coming together quickly. It looks great as it is, but if you have time for a fancy border, that would be beautiful.

I like the idea of a vine in the border: birds in the vine instead of the air!

How great to have all those blocks on hand. Your finishing plans sound real,y good.

Love the idea for the applique border - hope you can make it work!

Well that went together quickly and it looks lovely. The border and appliqué will be a nice addition. Boys and drums. Let's hope he doesn't get a taste for it! Camping in the lounge room seems to be as fraught as it is in the wild. I would definitely counsel against leaving the rotary cutter out - popped into a drawer for safety. Just be careful with that sewing machine. Sew the fabric and not your finger please.

Sounds like a plan! The added border and applique will make it a truly one of a kind quilt! Lucky couple!

There are days where it seems like kids are bound and determined to press our buttons ... I had the 4 Ts on Wednesday before we left for the Blue Ridge Parkway, and I swear all 4 were pressing my buttons left and right. Hope you all got in that nap and have had a better day today.

Love your blocks. Sounds like a great border idea.
Time to pull out another color of scraps. What do you think the color will be?

Yikes! What a weekend! I hope things have calmed down since this post went up. Your border idea for the birds in the air quilt sounds lovely.

Love the colorful flock of Birds in the Air!