I have not posted my 17 in 2017 for a couple of months. I finally made some progress on one of my projects so I can post!
Yesterday I finished the hand appliqué on the last border block for the 1857 album quilt. I started this journey in January 2016 as a quilt along with Gay Bomers over at sentimentalstitches.com. She would provide 3-4 blocks for free each month and you just had to copy them off before she released the next set. They are available for purchase now in her store. I kept up until last September.... when life got in the way... and maybe I was a little tired of all the appliqué! I decided to do a 6x6 layout of my 10 inch blocks and picked the last 8 that I needed to get my 36 blocks of the 68 released. I had already started making the border fleur de lis, so continued on with those. Boy, did they take forever at the end! So far - these blocks are all done (oh shoot - one block still needs it's corner peels!) and just need to get sewn into a top - hopefully over this holiday weekend. One of my helpers plunked herself down when I started laying out the top border blocks to supervise the progress. I guess I did ok, since she has not rearranged them on me!

And one photo standing on the couch for a better view. 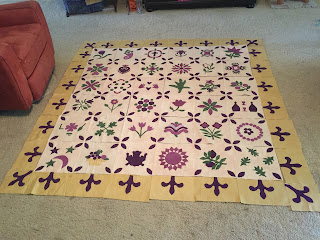 Linking up with Meredithe at Pomegraniteandchintz. Head on over and see how others are faring this year.
Posted by Deb A at 3:49 PM

WOW! What a huge accomplishment. The border is terrific, but all those great applique blocks -- so pretty!

This looks beautiful! What a wonderful accomplishment!

I've saved the patterns each month. I don't know if I'll ever get to appliqueing the blocks, but I've got the patterns if I do.

Oh my! A little at a time sure yields a nice quilt in the end.

All those individual appliqué blocks brought together has created a fabulous quilt.

What a wonderful finish ; it looks gorgeous !!

Carole~Quilter on the hill said...

Congratulations on finishing all of the 1857 blocks! Love the Fleur de lis applique border - well worth the effort.

I don't know if I'll ever get to appliqueing the blocks, but I've got the patterns if I do.