Well, the disadvantage of Aidan moving the guitar lessons to 4PM on Thursday with Nate (an instructor he really enjoys); is that Emily and I walk to get our steps in and we tend to walk over to Petco. They have kittens from the humane society in cages. For us to look at... each week.

Emily had a favorite she played with last Saturday. She was gone on Thursday. There were two new ones on Thursday.... one was gone on Friday. Two shy ones were still there that had to go together. They were very active and following us Thursday and Friday in their cages. But Mom..... what if someone gets them? (from Emily).

Sigh. We still have 13 year old Maxie and Sophie. Maxie is drinking but not eating much. She still does not look to be in pain. They are both giving me the look right now.....

cause we brought home Star and Nazareth who has been remanded Rascal. 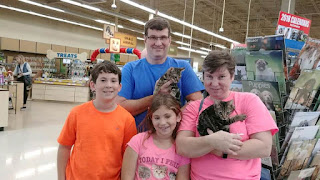 Star is still Star so far and still a little shy. He was purring up a storm as Aidan pet him though. Rascal has explored the whole house (except the garage which is my office and sewing area and is way too messy for them so that door is shut!).   He is where ever people are... and has claimed Greg's lap once he wanted to settle in for a rest after being home for  a few hours. Star settled at the bottom of the cat tree at was purring up a storm as Aidan was petting him.  We are officially outnumbered. 4 cats and 2 guinea pigs to 4 humans =). Must find the water spray bottle as they are putting paws into the guinea pig cage.
Everyone is giggling as Rascal is chasing the red dot on the floor. Silly kitty. Star just came out to see what was happening. We will see how long it takes for him to join in the fun.

That is a house full!


I really like your new decorative designs! it's so beautiful so much and good idea on site.