A day of rest.... that is what Sunday's should be. Unfortunately it is usually a prep day for the week ahead.

After a camping trip (cabin camping) with the girl scout troop and a full 12 hours of sleep last night - The kids tucked me into bed around 8 last night - I feel refreshed!

The kids are just off to Grandma's for the Cooter festival today. Me... I should pick up the house and get a little grocery shopping in. It is finally cool enough to weed gardens..... but the reality...... I think I will sew!

I plan to get a good start on making some blocks for Aidans quilt in his colors. Emily's is to a top stage... and will require a shopping trip for backing sometime in the next week or two. I will also need a backing for the finished tumbler hand pieced top as well.

Eventually, some slow stitching will happen later this evening... It will be a toss up of either adding some leaves and the middle parts to the Save the Bee's block 1 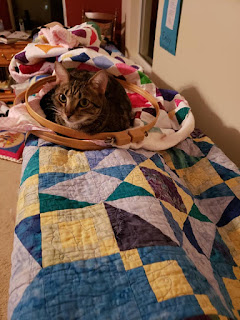 hand quilting on the baby quilt which has had no progress on it since I last posted! Someone has been using it for a bed.

Linking up with Slow Sunday Stitching and RSC Challenge.

Now for a little recap on my week if you are interested.

The hands are healing from the attempt to bring the cats to the vet this week. The new ones were to both go on Monday. Just Peanut went... and I got lots of scratches all over my right arm and hand from Ollie. Wednesday, Sophie was to go in the afternoon and if I could get Ollie he would go too. The kids were home on a half day of school to help. Sophie went.... Ollie got my right hand ring finger - huge scratch along the inside a bit below the knuckle to the first part of the finger. Yup - at the itchy scab healing part now and it still hurts 5 days later! So fun when you walk into the vet and they exclaim on all the bloody band aids you have on you!  Thursday - I managed to bowl with a band aid on that finger... did pretty good with my first 202 of the season! Friday around 10:15.... got a call from school with notice the kids had been evacuated to the school next door for a suspicious package.  We had the option of getting the kids... which at 3 miles away and working from home, I went and got them.  I figured it was around 10:30 and adding 860 elementary school kids to the 1100+ middle school, at lunchtime it was best to clear them out not knowing time frame of them getting back to their campus. The kids were scared when I got them - very worried about each other. Turned out it was just replacement refrigerator parts in the teacher fridge not labeled. The bomb squad got to remove and X-ray it. Quite an interruption for the day but with all the news of bombs in the mail the last week they went with extra caution. I took the kids back around 1:20 when the campus was cleared to get their bags - Emily's 2 teachers had a total of 7 kids in class and Aidan's 2 teachers had 4 kids. Normally would be around 40 in each. Our safe Halloween was to be that night but it was rescheduled for Tuesday. That worked out OK... as we had our girl scout camping trip that night and a bunch of the girls would have missed it. A few would have been at a neighboring school's event... and we were fortunate they did not go as there was a fatal shooting just off that campus but during the safe Halloween event. They went on lock down. All at the event were safe, however it sounded like a very scary situation near Saddlewood Elementary in Ocala Fl.  Mom - for reference - Emily used to go there for speech before she started school. The one behind Sam's club and right by where Terri and the kids stayed at the hotel in February.


This week - looks crazy as well. Monday is girl scouts - Halloween party and birthday party for the founder Juliette Gordon Lowe. The girls decided pot luck and will bring a game and prize (candy or other) to trick or treat around the room with costumes as optional.  Tuesday is guitar for Aidan and maybe the safe Halloween at school. Wednesday the kids want to go trick or treating. Thursday - my day off work and bowling time for me. Friday... Oh my goodness.... I don't think I have anything planned that evening! Woo Hoo!

Hope you all have a safe and happy week. Don't forget to get out and vote early if you can or do your research (tons of things on our Florida ballot this voting period) and prep for voting Nov 6! I'm planning to vote sometime this week at our library. Every vote counts!

what an interruption for the day - better to be safe than sorry though of course - and this for refrigerator parts thankfully.
I used to have cats - and a lot of scratches! cats can be a pain but yet lovable too.

I'm sorry you had to deal with that scary business on top of other things this week! I'm glad the schools are extra cautious, though. Wishing you a quiet day of relaxing stitching!

How scary for the children. Glad that it was innocuous. I’m surprised at how large the class sizes are. Maximum of 30 students over here. Like you I need to shop for some backing fabric.

Glad all is well with the kids and school. In 2013 we had a cat. Had had him about a year. He decided he would fang me on the top of my right arm about 2 inches above the wrist bone. I stayed in the hospital for 8 days and never asked them how sick I was but it took 50 packs of antibiotics to get me well. Think is was Cat Scratch fever.

Needless to say there are no animals on the place ever again! I do hope your immune system is better than mine!

Take care and have a good week!

Oh my your kitties must hate the car ride or vet! Max loves to ride in the car but no vets please. He will turn 16 this year and am sorry to say I see the end is coming. I don't want to see him suffer but I don't know that I can take him in. He's been my best bud!