Monday afternoon, I worked a little on Emily's triangle quilt. We got a few rows sewn together and found the last 2 rows of triangles.... were missing a few (6!) and cut out a few more so we had the needed 34 triangles. I have 2 sets of 4 rows and one set of 2. It is 17 triangles across (using 6 inch strip and 60 degree ruler) and 12 rows for a nice size lap quilt. This is replacing one I gifted away which someone was not happy about! 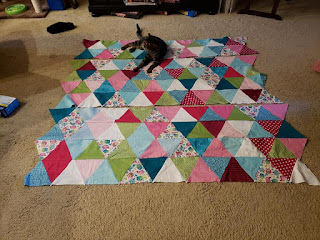 Tuesday... the boy jammed his fingers at gym or recess catching a ball.... which made the guitar playing hurt so we put off the lesson a few days. Instead he helped me make two pillowcases - he picked out fabric on Monday for it. One for his pillow and one for his smaller 17 inch pillow. I hear they worked well last night! 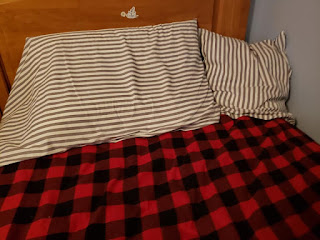 I also got a little stitching in on Save the Bee's block 1 while Emily was reading her Myon lesson. I was not allowed to be on the phone or my computer...but she let me stitch! I back basted the light purple and then needle turned it. I had already done that for the dark purple and started needle turning that... before I had to start dinner - Taco Tuesday! 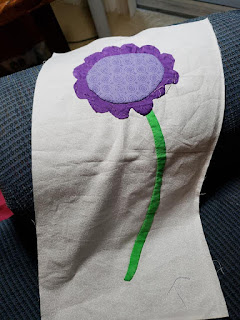 I attempted Aidan's requested dish cloth - he wanted blue and green (we got yarn Monday) as 4 patches... but when I started knitting it in the car line today I had an opening between the green and blue - cast on 40 - did 20 in blue then tried 20 in green.... but there was that opening. So.... I searched a bit and convinced him to like this pattern - changed slightly so it will be blue, green, blue and then the second one green, blue, green. That took concentration, so I just took pink yarn with me to an area girl scout meeting last night and started my standard knitting dish cloth, no thinking needed. One of the people from Tampa council always remarks on how much I get done in the meeting... which was really maybe 30 minutes once it started! I guess I had done the same thing the last time I went to that meeting in February! 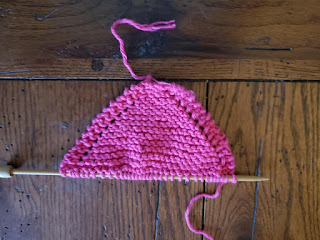 Once I get Emily's to a top (She doesn't know it but she is going to walking foot quilt it!) .... I need to really start on Aidan's quilt. He decided he did not want to sew it... I could since he got so frustrated with it. His is Hopscotch Butterscotch in teal, orange and grey.
Better get off here and log into work.....after I throw dinner in the crock pot. Stew beef with cream of mushroom soup, lipton onion soup mix, brown gravy packet and 1 cup of water.. with lots of carrots and an onion. Recipe from Grandma. Will serve over mashed potato (Aidan) and noodles (Emily). It will work... since we have horses today at 5.... right at dinner time! Emily also has her KCL (Kindness, community, leadership) club after school today until 3:15... so that means a little one on one boy time for me between pickups.

Labels: knitting, pillowcase, Save the Bees, Triangle Quilt Along.

I'm with the Tampa councillor - you are a dynamo! The triangle quilt is shaping up well and Aidan's pillow cases look comfy.