Not really but I was working on some blue blocks last weekend after cutting up a bunch of blue 2.5 inch squares so I could finish these blocks. I needed one of the stars and twelve of the nine patches. That gave me 40 each of the stars and nine patch blocks. Here is a shot of 80 6.5 inch blocks. 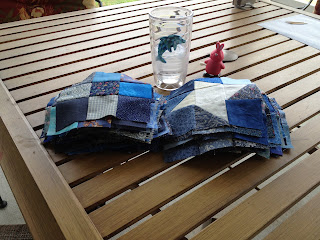 I think that will give me an 8x10 setting... but I had some notes of making 8 more of each block.... so I guess I was thinking I needed it longer and two more rows would do the trick. I need to do some math and see how many more blue squares I need to cut..... I believe I have that many hst's left still so it will clear out all the remaining leftovers from my parents anniversary quilt! I just love using up existing pieces that are just sitting around waiting to be invited to join a quilt. Don't you?

On the other front....time to clear out the fridge. When you don't feel well and don't cook for 3-4 days.... sometimes you need to poke around and see what needs using up. I talked the kids into eating some apples for a snack this morning... they were getting soft. A bunch of oranges will probably be squeezed into some juice and used with some honey to make some orange chicken for dinner tonight. The kids won't eat oranges... but will drink orange juice and eat this chicken. The two cukes..... one was made into a dill salad for lunch and the kids each had 3 or 4 spoonfuls! It is a quick salad I found years ago from the Taste of Home Magazine. I never use the recipe anymore and just do it by taste. A big spoonful of mayo, some vinegar - maybe 2-3 teaspoons, some sugar - 1 tablespoon or so, some salt to taste and then some dill weed. I use a good sprinkle - maybe 1-2 teaspoons. Stir this together with a whisk. Then add some cucumbers that have been sliced. I usually use one European cuke or a couple of regular ones from the garden. Put in the fridge for a bit before eating... although I never get around to it and it tends to get eaten all up before I can chill them.
Posted by Deb A at 11:24 AM

I always feel so virtuous whenever I use up leftovers from another quilt. I don't think I do it often enough though!