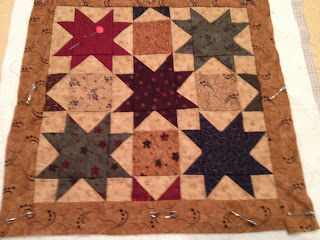 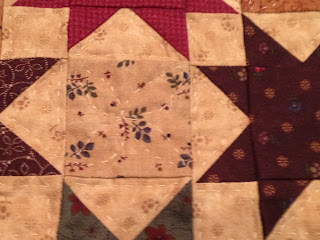 First.... I was all set to pin the graduation quilt last night and found a little hole it in. I will have to take it off the boards and fix that somehow today... better to find it now than when quilting it. Somehow a seam was a little less than it should have been. Instead... I pulled out the March block from the Quilt Square along and only have a few more stitches of hand quilting before I put this one aside until I put the quilt together next year sometime. I really like having something to grab that I can work on in the little minutes of 'free' time I get with the kids. Not too bad for 2 days work. I had stopped at my local quilt shop on Friday to pick up some hand quilting thread that would match better than the one I used for the January block ...but they had closed at 4 and it was 4:10. Bummer. I looked in my sewing room on Saturday and found the thread I just got from Connecting Threads and I think it works great with this quilt. I fear that my hand quilting will always be without a hoop or thimble =(. It just feels easier for me to control.

So, what do you do with all the ham leftovers from Easter? I had a 7.78 pound ham for 4 adults and 2 kids....so there is a lot left over. I got out the Seal a Meal and made two pouches of ham to go into the freezer for later use. Please remind me to go in there and find this ham in about two or three weeks!
The rest will be split up into these three recipes that I'll make today.

The first.... French Lentil Soup. I got the original recipe here from the Costco Connection magazine on-line. I used to have a Costco membership up in Vermont and loved this magazine. They usually have some good recipes and the month and page I am referencing is Crock Pot recipes. I admit... I've only made this one and I love it. I modified it today by putting the ham bone with ham surrounding it into the crock pot to cook. about 2 cups of chicken broth I had leftover in the fridge and water for the rest of the liquids. The Herbs de Provence I picked up for a recipe from Melissa De Arabian over at the Food network with skillet zucchini and onion. Another yummy recipe. Anyway..... I have made this soup multiple times... sometimes I use just Thyme and other times I use the Herbs de Provence. Either way it is a very yummy soup. The kids will even eat it! Got to love that. Emily was playing in her room while Aidan and I put this together. I cut and chopped, he measured and added and stirred. So nice to have little helpers around (when there is not time limit to getting things done!) 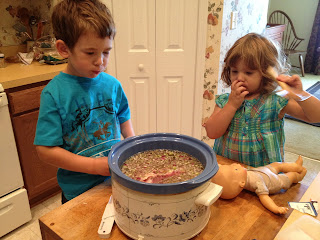 The second recipe is a new one to me and I'm going to modify it. Dinner tonight will be some soup and then a ham and veggie pasta that was in my e-mail this morning. I think it was from Betty Crocker. It is a warm dish with penne pasta, ham, veggies - (I have a summer squash, mushrooms, spring peas in the pod and onion in the crisper that need using!) and the 'sauce' is an italian dressing. We'll see how it turns out later tonight.

The third recipe is my old standby and a favorite at my house. The original quiche recipe for Light and Fluffy Quiche is from Allrecipes.com and I modify it a bit to fit my needs. Tonight.... it will have leftover asparagus, ham and cheese in it. This will probably be my breakfast tomorrow and the kids and Daddy's breakfast or lunch tomorrow.

Yummy recipes!
I bought a 12 lb turkey and a pack of country ham. Because I was cooking for 14, most were adults and big kids, I didn't have much left :(

Lots of yumminess going on at your house. We went to a party instead of cooking and so have no leftovers. All your delicious recipes are making me wish for some extra ham to try to use up.

We can form our own handquilting club - I don't use a hoop or a thimble either. I've tried, and it just doesn't feel "right."

I am a big allrecipes.com fan myself. The ingredients option is perfect. Type in onion, peanut butter...well, you get the idea...and great ideas come out.

Your easter sounds lovely. We had leftovers today, too.