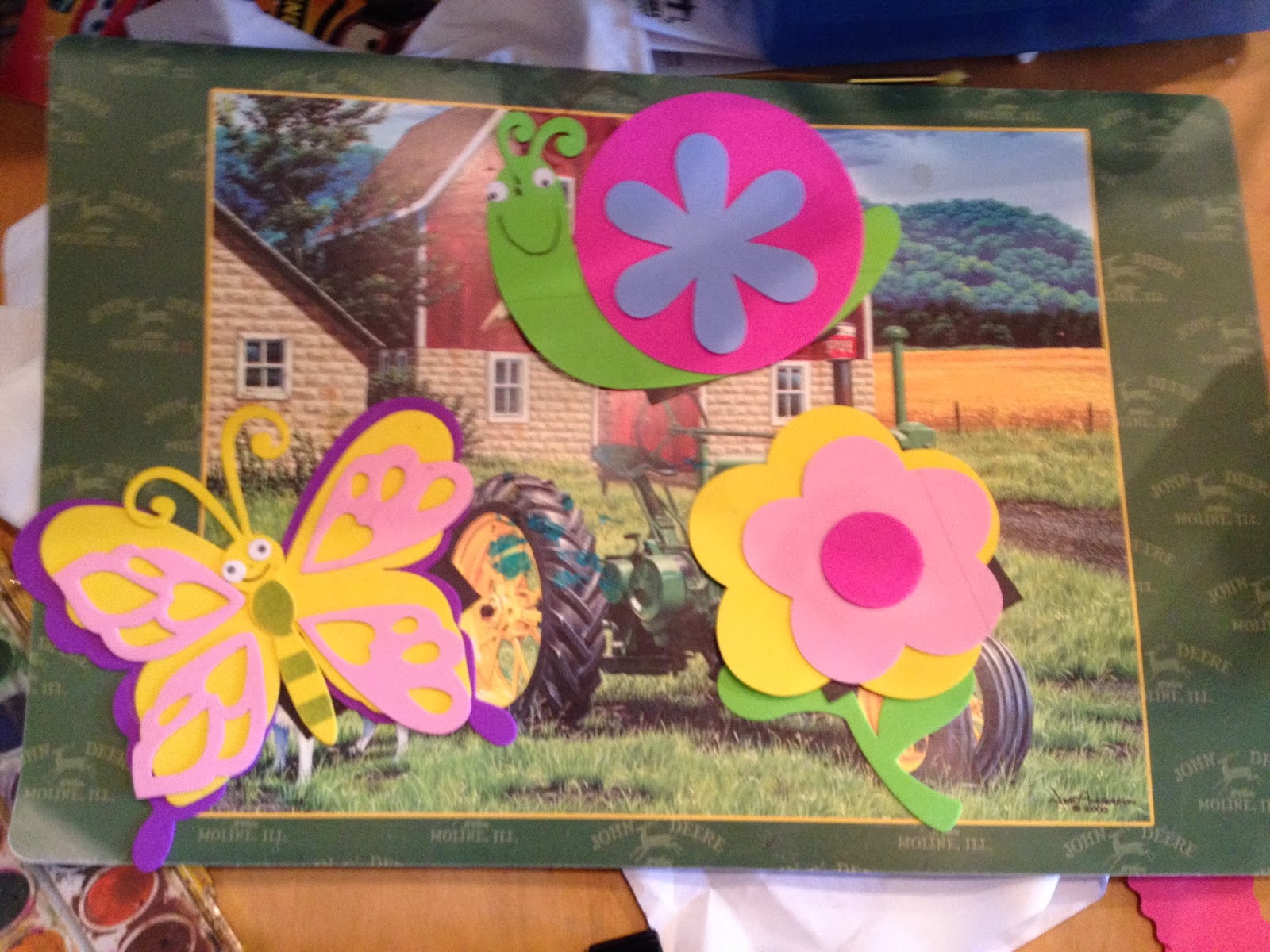 I got a bunch of hand work done this week while sitting with sick kiddo's. Emily wanted to snuggle most of Wednesday with me and two days later it is always her brother's turn. He got sent home from school with a 102 fever - extremely high for him. After some medicine, then throwing it up and resting with a few recorded shows he seems to have gotten some energy and is busy making some dinosaur's from foam that Grammy sent down for Valentines day. Emily is busy making her flower, butterfly and snail versions. Now that those are done and he played a bit on the ipad he is back to being really, really cold Mom. Yup - temp spiked again and I can't give him more tylenol for a couple of hours. Somehow I am out of Advil.... so Dad will bring some home after work. I have a feeling he has more than the cold his sister had. 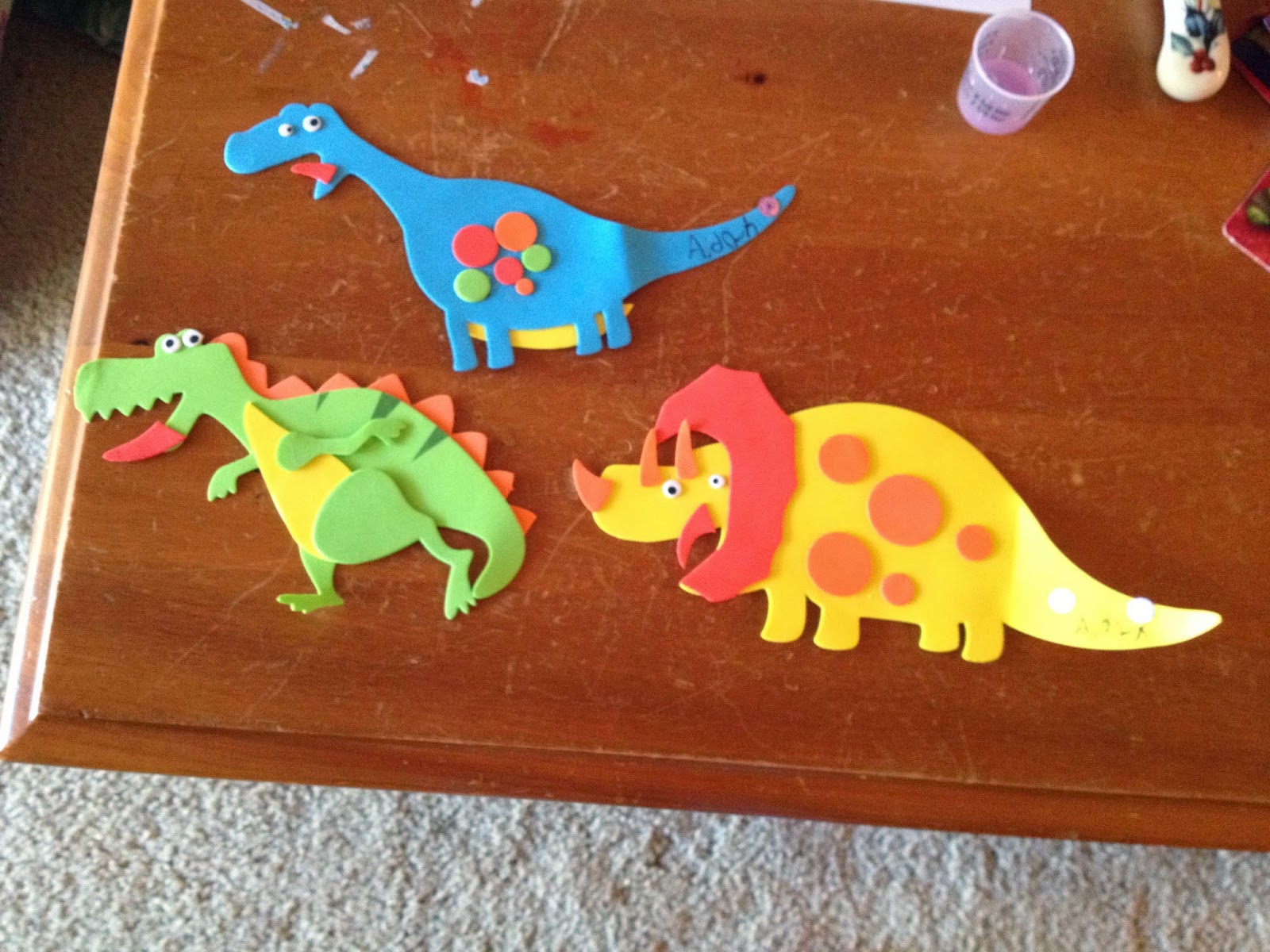 I prepped and made a few hexie flowers... and then prepped and made some more this week. Now the decision - do I frame them all with yellow like I was planning or go with black, which I saw out in the land of blogs last week and really, really  liked ...... Maybe yellow around them all and then black to link them together? Cream or another color? Maybe I'll just leave them and keep adding colors each month until I figure out what I am going to do with them. 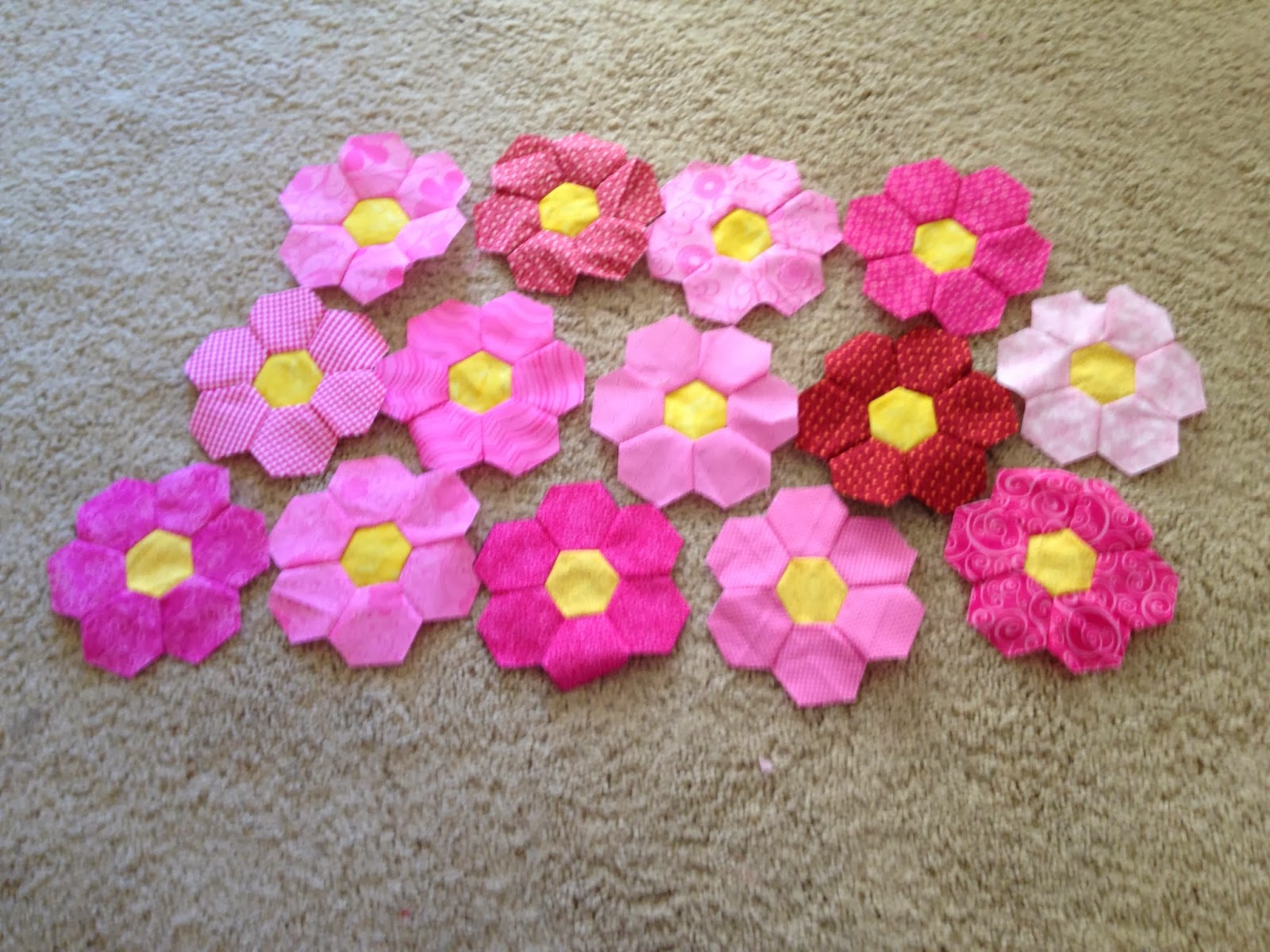 Being Valentines Day... I just had to start/pull out a new project. Who could resist these pretty hearts? I had made a version of this quilt years ago for my niece Sarah. I have a bunch of print pastel fabrics cut out to make another .... lets see she is 14 so they have been waiting for about 13-14 years now. Poor baby fabrics. Time to play with them a bit I think. I'm going to use the pastel dots on the cream background for the background of this one. 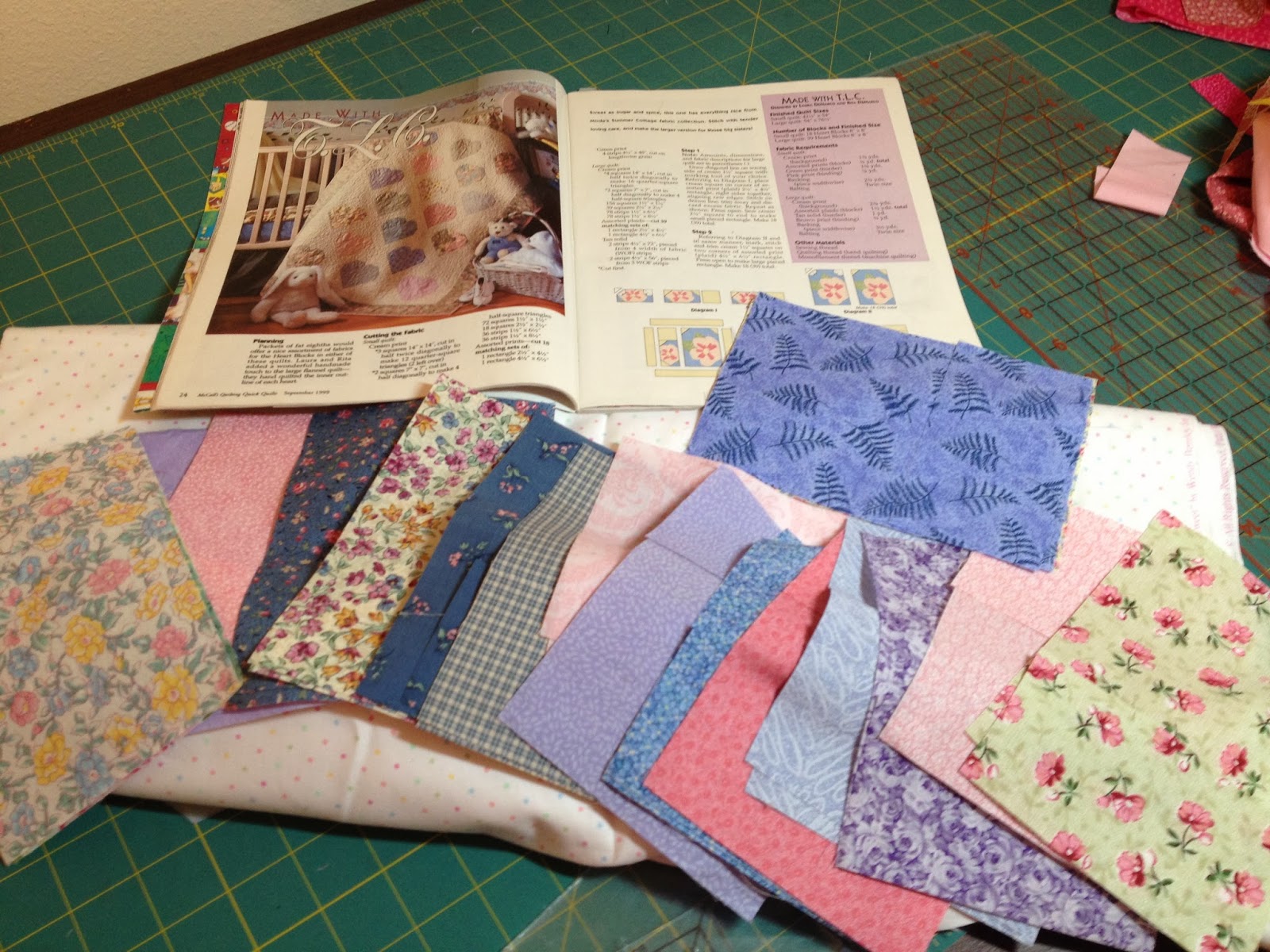 I feel like Suzy homemaker (no, not cleaning the house Mom!). I have Greek Chicken baking in the oven, Greek salad prepped in the fridge (and the house reeks of garlic - I may have grated one too many cloves into the marinade). 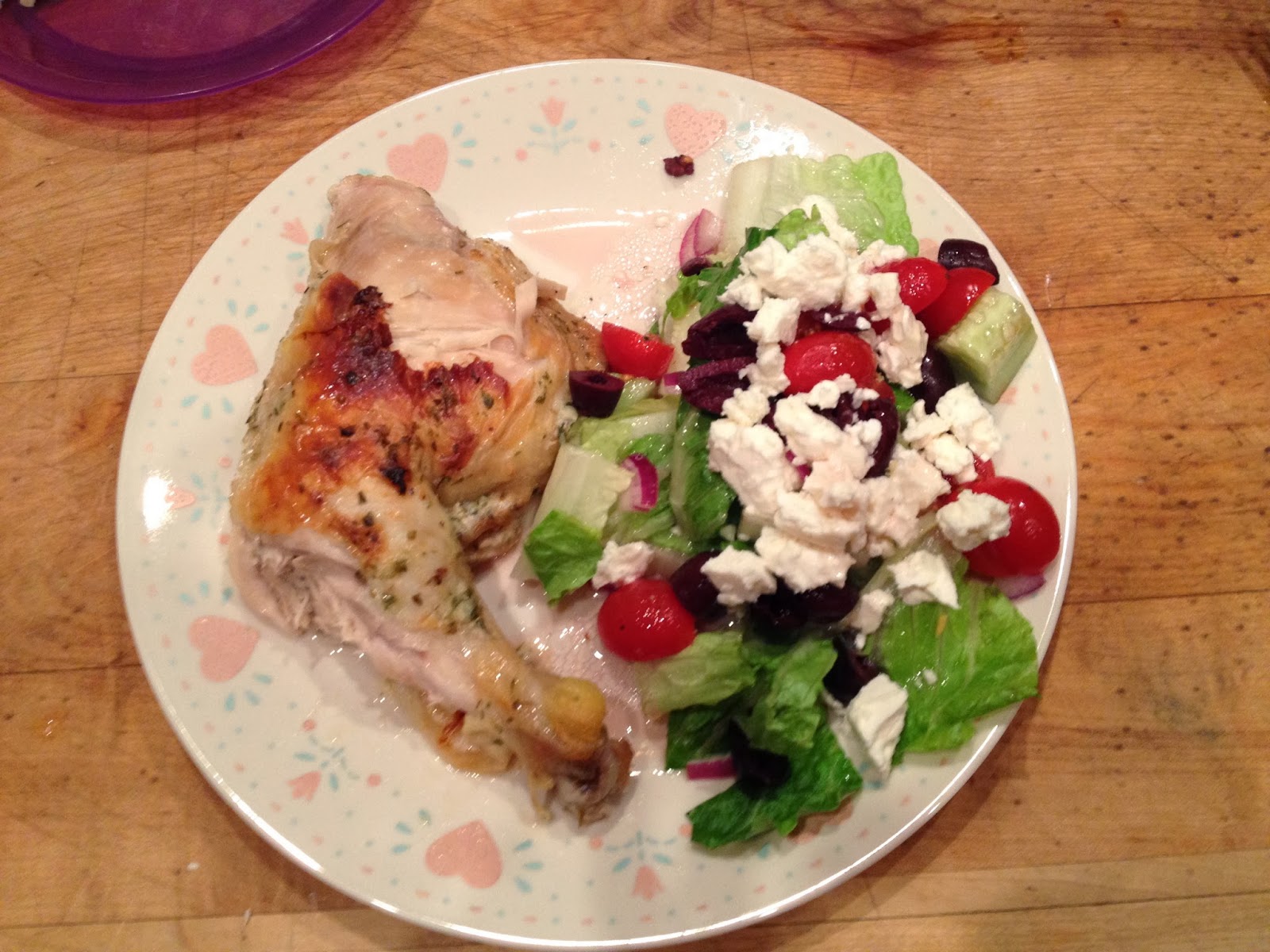 I made a cheese ball for the hubby for Valentines Day (yup, real romantic here at my house - I prefer all the little things he does all year - like starting the van when he left for work so I had a nice warm car to take the kids to school this morning with no scraping of the frost off the windows). Sugar Cookie batter is chilling in the fridge to be made into hearts later this evening when the oven frees up.
I think I'll go cut out the background fabrics for the above project so I can sew up some little hearts the next time I get to play with the sewing machine on Sunday.

Head on over to SoScrappy on Saturday and see what other pink projects are being worked on.
Posted by Deb A at 5:14 PM

Sorry your kiddos have been under the weather - hope everyone is healthy again soon!

Mmmm - Greek chicken and Greek salad! Thanks for the pointer to the chicken, I think I will be making it this weekend. I love Greek salad, although the version I grew up with also has Greek potato salad (Pappas Restaurant in Tarpon Springs).

Sorry your little ones are under the weather. My grands are dropping like flies ... And with T#1's birthday party on Sunday, we're praying that they will all be well enough for the party to go on as planned.

That heart quilt will be gorgeous! I love,the fabrics you've chosen!

I hope everyone is feeling better soon. Greek salad sounds wonderful. Everyone always love sugar cookies. It looks like you will have a new fun project.

'Tis the season for cold and flu. Hope they're both up and going again soon. Lovely hexie flowers. Whatever you decide will look great but the black joining the flowers will definitely create a sea of blooms.

Your hexie flowers are quite nice.

That supper looks delicious! Hope you had a lovely Valentines day in spite of the sick little ones. They did well with the crafts!

Your hexies look super, just scattered on the grey carpet! Have you tried laying them out on a yellow background, and on a black? The yellow hearts sparkle. You don't want to swamp them.

When the first pic came up I thought you were doing some art quilt. Love your flowers. You are getting a lot done. I will work on mine again tomorrow.

Nothing like sick kids to change your plans. But when our kids need us there is nothing else we can do. You got a lot done under the circumstances. Black was pretty popular several years back. It seems like it might be creeping back. Good luck with your decision.

I hope everyone at your house is well soon. Love the children's artwork. They are talented like their mom.
Cute hexies. Oh my. Looking forward to seeing the hearts quilt come together.

I don't know which I like better--your pink hexies or the looks of that Greek chicken. I will have to try that recipe. Hope your kids are all better soon.

Hope your kiddos are feeling better today. It's never fun when they are sick.

Very pretty hexies. I've become a big fan of black with brights. But if you are in no hurry to finish the project, waiting till you have a few more might inspire you to something else.

Pretty hexies. They look like the Cosmos I grow every year in the flower garden.

I hope the little ones are feeling better by today.
Those little hexies are oh so cute! I thought the laptop had suddenly got smelling powers and I could smell the garlic in your house then I realized DH is making curry,lol.. I bet that salad was delicious ;)

I hope everyone is feeling better by now. We've all taken turns at our house too. Hoping that winter will be gone soon. Frost on the windshield? Yikes!