This morning I have a headache and am very tired from the stress of watching the chaos unfold yesterday. I stayed up until 1AM... when they protested Pennsylvania's electoral college. Thankfully, they did their job and certified the results of the fair election and President Joe Biden and Vice President Kamala Harris will be given their Oath to uphold the constitution of the United States on January 20th at noon.

Other than saying I was appalled watching fellow Americans become terrorists by breaking into the sacred house of democracy attempting to overthrow our government, I sincerely hope that peace and common sense will prevail and that the Constitution of the United States will be maintained and the will of the people and democracy will prevail. It is a sad state in the world where this happens anywhere, but especially in your own country. I am writing this for me, for my feelings. This has been building for the last 4 years and no one should be surprised by it, but I sincerely hope that cooler heads will prevail and that they will finally do what is right and remove all the elected officials that are not doing their duty to country in the Oath they took to Uphold the Constitution of the United States of America.

I had made a new meal in the crock pot last night - Greek Chicken. (It was OK. If I make it again less olives and don't forget the feta cheese!) I put placemats out on the table and told everyone the rice and meal was ready. The tv was on in the living room and the kids and I were watching the chaos. I left to go get them around 3:10 so was offline until 4ish when I picked them up and got off the school campus where I had internet access again. I handed the phone to Aidan in the back seat and said check CNN and see what is going on. I had asked if they were aware of the riot, they were not. We listened to Biden's speech - very Presidential according to the kids. When everyone filled their plate.... they all looked at me then wandered into the living room to watch the events unfolding on tv. History was happening.

I pieced this flowering snowball last night once the congress was back in session. It was very soothing to stitch. I need to prep more parts today with the cutter. Emily draped them over Peanut who took over my chair when I got up to get the photo's. 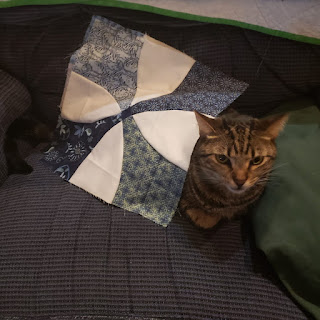 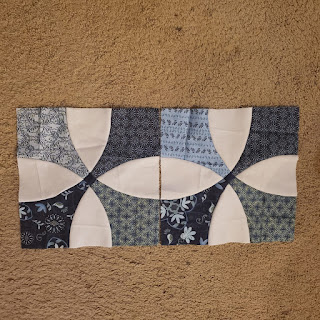 I had logged off work early yesterday as I wanted to watch the joint session of congress and knew I was too distracted to work around 2PM. I'll need to make up that time.... but not today. Today will be sewing therapy, chatting with the chickens, petting the cats and working in the garden to till it one last time, put up a fence to keep the chickens out and start planting it.

I so agree with you and glad you let the kids watch it unfold so they could see history happening. I too watched for hours and hours and was in a state of disbelieve - I have been saying for four years that we had a mentally deranged president and many could not see it and say he wasn't that bad - I wasn't sure how it was that I could see him for what he was way back when he was running for president close to 6 years ago now and that others couldn't see that he was very bad person. I hope they toss him out before the 20th we can not take two more weeks of him.
Now I need to chill out and get the new quilt on the frame.

I think most of the country was glued to the TV coverage of events in DC yesterday - I was, too, and very horrified by what I saw. So very ready for Biden and Harris to be inaugurated and some sense of sanity to return. Sewing therapy is definitely needed today! Your snowball blocks are already looking great!

I was watching as well and then woke up unexpectedly in the middle of the night to watch Pence (finally) certify the election results. So glad that mob riot did not derail democracy, but I hope that our leaders will take control of the situation before this happens again. I will feel so much better after the inauguration is done. Seems like something you would see in other countries -- not American at all!

Your snowball blocks are just so lovely in those colors...
beautiful work...hope they can help to soothe you...
hugs, Julierose

As I said on another blog thee world has gone mad it seems, such shocking scenes. Chatting with the chickens and petting the cat sounds like perfect therapy to me.
Have a great weekend,
Jillxx

You might be surprised at how much interest there has been from Across the Pond at the whole business. Never thought it in my lifetime but yours is a strong, resilient nation and there is much confidence that justice and democracy will prevail.

On another note, Greek Chicken in the crockpot sounds rather delicious and good progress on those Snowball blocks.