I had big plans today.... but not too much of it actually happened! I did get a little sewing in, not exactly what I had planned to work on though. Oh well, progress was made. Some will wait for Saturday and the RSC but I will show a progress shot of a 'new' project.

I know, last week and you are adding another 'block' to the mix? Why yes, yes I am.  I had marked page 34 - Erin's Butterfly in the book that has hand drawn blocks where I found a version of my 'Endless Diamonds'.

I had just enough template plastic to make the 3 parts needed. Must remember to get another sheet of that stuff! I cut out the 20 'fans' and then found a light pink fabric for the inner part of the wings. I machine stitched these fans, then hand pieced the curved portion on. Now I'll baste the drawn stitching line under so I can applique it to a background... then add the body in the middle and some embroidered antennae. 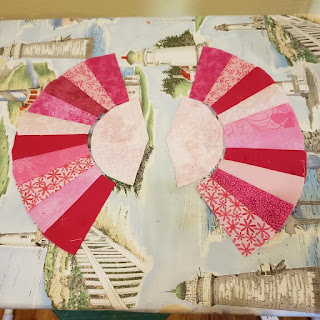 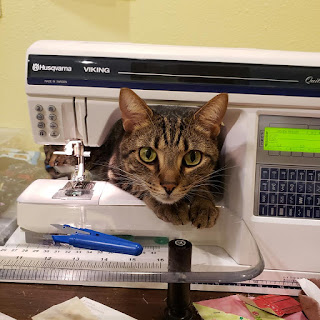 I might have been sewing around this. It appears someone thought he needed to be sleeping on my lap and Mom was not sitting and allowing that. This was his response! Peanut, ever the helper in the sewing room.
I added another of the flowering snowball block and have another in process. I had cut out more parts over the weekend and forgot to make more of the middle squares. A quick cut last night and I was good to go for another 4 blocks. 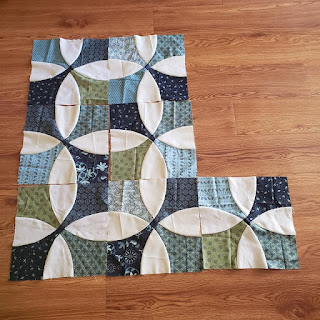 I did manage to get this one pinned and then just did a machine line down the middle and made and attached the binding. I 'might' add hand quilting... I 'might' just add the eyes and call it done! 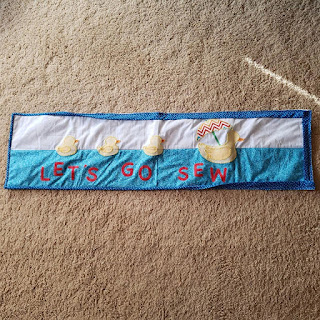 5:30 and I am guessing the kids are going to want dinner. I really wanted a burger for lunch.... so went out to Five Guys and got one. I am still full so will prep something for them and if I am hungry later I'll just have some strawberries and a salad.
After 2 months. I rearranged my living room (and vacuumed Mom!) so my recliner is back where it was closer to the sliding glass door rather than by the kitchen divider and facing it. It was nice where it was for Christmas so I could enjoy seeing the Christmas tree but it was time to get my stitching set up back to 'normal'. I may regret it later tonight as it is going to get cold (30's freeze warning) and the big glass window is not insulated. I guess it will be a quilt and 2 cat lap night!

yes big glass window not insulated isn't good in cold weather - we will get in the 20's tonight - brrr too cold I think. I think it is great you are adding another pink project! I am looking forward to finding out what the next color is and ready to start - I will put aside the current quilt kit that I am slowly cutting pieces for and will work on the new color and then go back to cutting. A hamburger sounds so good!! Your cat is so cute peaking out of the sewing machine

Your projects are so pretty, Deb. I look forward to seeing how the butterfly blocks once completed. I have a UFO butterfly project that really needs some love. You kitty is just too cute and I bet is a hoot. Looking forward to your next update . Stay warm and cozy. Hope you get in a lot of quilting this weekend.

OMG!! Peanut is SEW funny!! Nice progress on projects, Deb. LOVE how the Following Snowball is coming along!!

That sweet face peering through the sewing machine would be hard to resist! Your new project looks intriguing - looking forward to seeing how the butterfly comes together. And, of course, I love your flowering snowballs! They're already creating such a neat design. I'm with Karen - a hamburger sounds yummy!