I managed to go into the sewing area this morning and pulled some greens and sorted. It appears my big pile of green scraps was tossed late last year or earlier this year when the cat decided he was unhappy with something. Good thing I have a nice stack on the shelves and I'm sure there are some scraps hanging around in various bins... that someday might get sorted again!

I found this selection of sage greens for a 16 patch that I hope to sew later today. I think the crossed canoe will be done in one of these more solid colors before I pull the darker greens out for their 16 patch and crossed canoe block.  I appear to have more bright green than dark green now with all those scraps tossed! Linking up with the RSC Challenge. 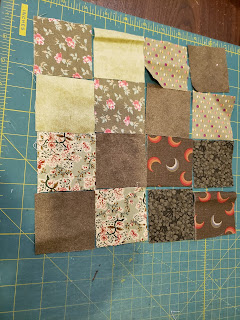 First - it is girl scout errands. I need to head to the GS store and pick up badges for the final meeting Monday night. Then the financial report is due tomorrow so I should probably start that today as well. We do have doggie training this afternoon with Bear. Greg found a harness that arrived Sunday and walking him is oh so much easier now. He does like chasing the chickens in their run but we are in process of fencing in a bigger area for them so they can roam a bit more than the area they have now.  It will be a fenced in 60x30 area when it is done. Emily dug the deep holes for the big wood posts that will hold the gate. We started putting in the fence posts but that will be continued later today I think when it cools down again. That will open up the woods area for the dog to roam around in. We currently have a chicken fence keeping animals out of that area. We just need to fix the chain link fence that a tree took out last year before we open it up to the dog!

The end of year school events are happening. Thursday was the FFA banquet and Emily got a horse pin for participating in the horse evaluation contest with the other 3 ladies in the middle. 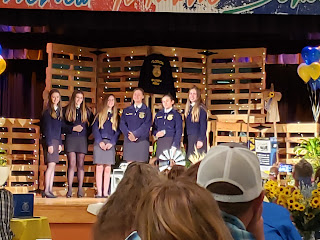 For a little green outside - these are the pretty purple flowers out front. They are a Mexican Petunia and multiply like crazy but they are pretty. They are busy filling in a triangle bed I have in the front. 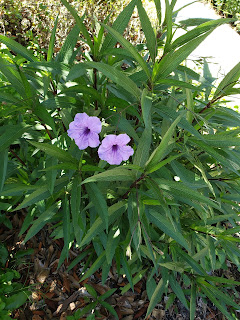 A couple of trips over to the Rehab facility to visit my FIL also happened this week. He is doing much better and just building up his strength. We will see if he will be able to live alone again after this. This time (he was in hospital fall of 2019 and rehab for a couple of months) he is willing to do the LifeAlert check in when he is released. We also floated an option of moving him in with us or doing a RV home in our big back yard. He didn't flat out say no like last time. I think he has been waiting for the road project that will be going through my house to hurry up so he can sell his place and we would do a FIL living area off our new home. We did get some things in the mail that looks like the project is moving again with plans going to the board for approval so we may be a year or two out for that. Things tend to move slowly around here.

sounds like big plans being made for father in law, hope that all goes well. Nice for Em to get a medal for the horses

Hope all continues well for your FIL; rehab isn't easy...
it got hot and humid overnight here--BOOM--it's Summer--no Spring really...;(((
I did sit out for a bit--but no comfy chairs out there for my back...
will have to see what I can gerry-rig up...
Sounds like a busy end of the year for you. My grandchildren are all home from college now--one of the twins, Greg, has tested positive for Covid despite shots and boosters...his 3 roommates did too...so i won't be seeing them for at least 2 weeks...
Stay cool and safe hugs, Julierose

Do hope you reach a good decision with your FIL which is workable and pleases all concerned.its not easy when family get frail, is it. That's a good start on your greens.

Best of luck getting your FIL situated when he is released from rehab, Deb. Such challenging times with aging parents. Sounds like he knows he might need some additional support this time around.

A busy time of year for you and your family. Hope your FIL continues to gain strength and get back to feeling better. That would be great to have him in your home.
Pretty flower’s haven’t really started showing up here yet! Just dandelions! 😃