Sunday... a new addition to the family.

Emily started asking about a dog last week again. Greg has been wanting a dog for a long time... he is a dog person. I am a cat person - and we have 2 indoor cats. We looked at the shelter dogs available and figured we would go take a look on Saturday. The one Emily wanted was gone. Her second choice they pulled the tag and there were some red flags they made us aware of. Positive for heart worm but being treated but she climbs fences. We live on a busy street but have a fenced in back yard. We decided to  walk through the kennels and look at all of them. The fence climber was very shy and would not even come out to greet.  Very loud barking and tons of dogs - over 200!. I think we were all overwhelmed. We walked down the second section. There was one Emily liked. It was there for a little over a month and they had observed it was Shy. 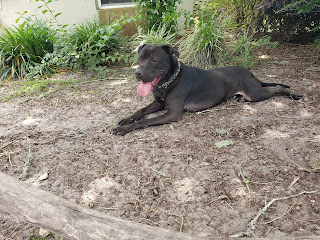 I can say... this dog is not shy! He is a people person, friendly and we both need to do a little training. He is extremely strong!  He does sit, down and a few other commands but it is a learning experience for both. He did good on his walk this morning and did not pull so that is a good thing. We think he might be named Bear. He came with the name Dasani but they just gave it to him for something to identify him since he was found wandering around. I think he was a family dog since he is always where the people are.
He is 60 pounds of energy and love! 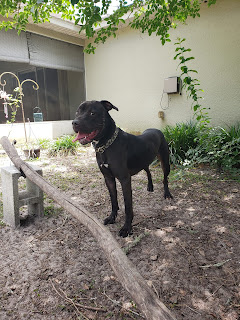 All tuckered out last night on the couch. He did look at me when he got up there and I told him it was ok. I never showed the label I made for the Memory quilt. I decided to try and embroider it and it did hold up in the washing! 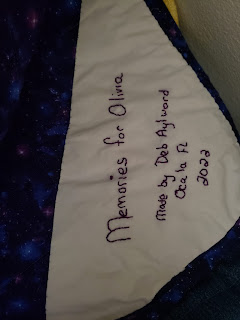 Aidan needed to process our getting a dog (he did not think we needed one!) by baking. He made Mary Barry's Victorian Sponge with a red raspberry and grapefruit jam. It was extremely yummy and we requested he make it weekly! 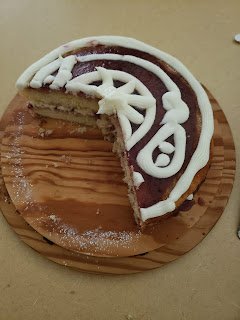 This afternoon I finally got the Girl Scout troop scheduled for their Painting and they let their Mom's join in the fun! A mother daughter event for 12. Aidan headed to Grandma's for the day and Dad will be on dog and animal duty for the afternoon. The cats are hiding out in the master closet area - once we got Ollie back in there. He escaped last night and was hiding in the front room under the Victrola for about 10 hours. Aidan got him out and into the master bedroom. Kitty doors are arriving Tuesday and will be added to the master bedroom door and the laundry room door so they have 2 areas free of the dog for safety.  I will probably be on Aidan pick up tonight - Greg is feeling his back with all the doggie play. Hopefully I will have a little energy tonight to add some stitches to the Endless Diamon quilt. A little bit of quilting here and there is adding up to more blocks quilted. 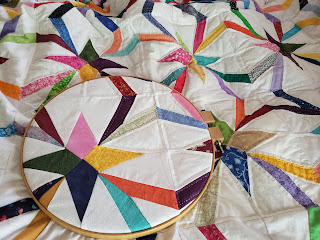 Linking up with the other Slow Stitchers over at Kathys Quilts.
Posted by Deb A at 1:02 PM

Oh my--I sure hope that new dog loves chickens--but doesn't want any for a snack--!!! You are becoming quite the little farmette--with chickens, cats, dogs, garden,and kids--even horse ridding on the week-ends!!
hope you found time for hand stitching--I am back to working on the large antique linen quilt I made--there is alot of work to do on that one--
take care and have a great week-hugs, di

the dog looks beautiful - I too hope he likes the chickens and the cats. Fingers crossed you all adjust to the dog and she to you all.

Your new puppy looks so neat!! Reminds me of my son's dog, Kota (pictured on my sidebar),
Hope you can fin time to get some quilting in on your beautiful "Endless Diamonds" ;)))...hugs, Julierose

Beautiful quilt and hope the dog works out for you.

Your new addition to the family is sweet. I smiled at the picture with him completely tuckered out on the couch. What a lucky day it was for him, and you all, when you walked up his aisle in the animal shelter.

Your new addition definitely sounds like a family dog. I love the fact that he "asked" to get on the sofa. Enjoy!

Such a sweet fur friend ; I am so glad he found the perfect home. Nice embroidered label I need to embroider more of my labels. Have a wonderful week. Happy quilting.

Bear looks like a happy guy! I would say Aidan has the right approach- that cake looks yummy. Enjoy!

I'm skipping the dog and the quilt - let's get to that cake!! OMG it looks fantastic! ;-)

Congrats on your quilt progress, Deb! Bear (?) looks like a good dog, but I'm with Aidan. I wouldn't have wanted to get a dog either. LOVE that he bakes to destress!