What a start to the week!

Sunday the troop and the Mom's all did a painting party. All were unique and I think everyone had a good time. 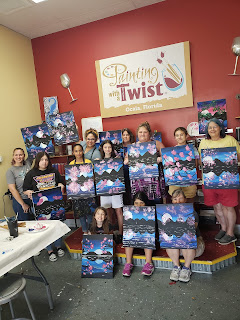 This was my painting. 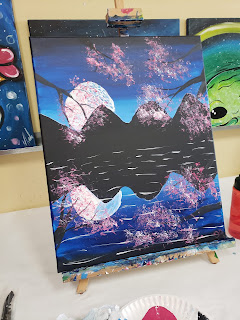 Monday while bringing the kids to school we saw this site! It was a standard pick up truck with 3 sofa's on the back all buckled in and THERE WAS A PERSON SITTING on the sofa! We followed it a bit on a 45 mph road and then.... they turned onto I75! The speed limit is 70 mph! Crazy Florida Man for sure. 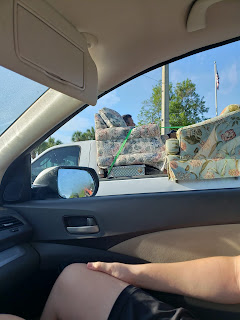 While in line picking up the kids from school I got a call from Greg. He got a call from his Dad's neighbor who had just dropped him off to the ER! What? Turns out he was very dehydrated, frail and pain in his kidneys. They are very understaffed at the hospital and I would say terrible service. After some pushing over an hour after saying they would admit him with no info, Greg asked the triage nurse if he could have liquids. Nothing given - no IV or water the whole 8 hours he had been there.... and he was still in the ER waiting room as 'there were no beds in the er'. Well, no beds on the floor so they amazingly turned on some room lights and put a few patients into the ER rooms for the night. Greg just headed over to check and see what the status is. First they wanted to release him to Rehab - which he refused. Then the Dr. was waiting on a bed on the floor he was covering. Sigh. Hopefully something will get straightened out and I know the administration was going to get a complaint while he is over there today. Our service in 2019 there was awesome the 2 weeks he was there in ICU and then 1 week on the floor before the 2 months of rehab. I guess the last 2 years has really decimated the nursing staffing at the hospital.
I did bring the cats into the office/sewing area (aka the garage!) yesterday while I was working. I think they were people petting starved! Peanut ended up sleeping on the laptop and Ollie was curled up in my lap. I did manage to work on the keyboard and monitor around them. 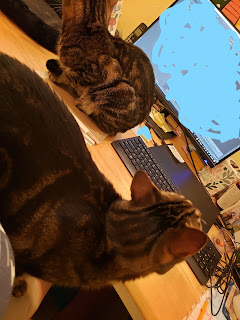 I am in dire need of some relaxing hand quilting tonight I think. Back to work for me for a few hours before I need to pick the kids up from school.
Posted by Deb A at 12:56 PM

Oh sorry to hear about Greg's Dad and the hospital problems--nothing is easy these days it seems. Hope he feels better soon...
Sounds like some quiet time sewing tonight would be good for you...
hugs, Julierose

gosh you would think when a person was obviously dehydrated they would be giving fluids no matter if they had a room or not! that is horrible - I hope he will be ok.
Those are good paintings - crazy on the guy riding in the back on a couch!

Your painting is so pretty! And the person riding on the couch in the back of the pickup is a hoot, too. But I'm sorry about the ER experience for Greg's dad. We had the same thing happen with my mom last summer - two days in a row. When I tried to find someone to ask for some water or a blanket for her, I got yelled at! And I noticed the guy who yelled at me was wearing a t-shirt that said something about healthcare workers being heros! My mom was eventually admitted to the hospital, so things were better up on the floor, but I hope never to have take her to the ER again. I hope Greg's dad is doing better. Dehydration is not a good thing!

Oh my what a terrible hospital experience- scary. I am so sorry that your father in law had to go through that experience. The paintings are gorgeous.

With that kind of start to your week, you should be at the end of the week by now! I hope Greg's dad is doing well. Our hospitals are overwhelmed as are our doctors. I called doc yesterday - I need appointment this week. She is completely booked for next 6 weeks - ugh! I finally got in with a NP. Greg's dad should have at least had water and possibly food. It looks like a fun time painting and I think the Crazies are everywhere! ~Jeanne

Crazy FL Guy and crazy hospital experience!! Totally NOT surprised that the kitties happily accepted some people time away from the home invader. Also not surprised at Peanut's choice of "cat bed"... Silly kitty!!

Aidan must be thrilled that F1 is in Miami today--we are tuned in to watch this brand new track...hugs, Julierose