So what did I do? Good question! Not as much as I wanted but that is always the case I think.
I slept in - oops! That walk at 8:15AM is a lot hotter than the one at 7:15AM! After breakfast and my Noom tasks and some surfing.... It was time to 'sew' the fencing together under the coop area. We used 3 parts of the fence for under it so nothing digs up and I used the wire that kept the fence bound in wrapping to 'stitch' them together. Can't have something digging under and getting those chickens! Much twisting and turning explained why I had trouble moving last night! Breaks in between were necessary with lots of vitamin water to replenish. Those breaks might have involved some hand quilting time. Emily cleaned the chicken cage so I was on chicken watching duty as we put them in the old guinea pig play area out on the grass. A shower felt so good after all that! 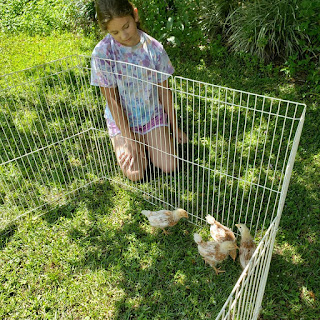 Then lunch and I fed the sourdough starter which had been neglected a bit in the fridge. Some searching for what to make with that leftover starter.... I had about a cup and a half to play with. I found a cracker recipe and the soft pretzel recipe I have made a couple of times. I asked Greg..... Pretzels please! Pretzels it was.... and would you believe I had enough to try the crackers too? I started the pretzel dough and got that rising for an hour while I found the ground wheat and made the cracker dough and put that in the fridge. I found a new audio book somewhere in all this as I finished my last book by Susan Wiggs last night. It was a good one but I can't remember the name and have already returned it. I found the sewing machine and started sewing some of the parts I had cut yesterday for the stars and nines. .... Then the timer went off and it was back to pretzel making! I got them shaped - 4 round pretzel shapes and 7 pretzel rods were the new shape for us. This is a wee bit time consuming but not too bad. You have to bring water to an almost boil and add baking soda then 'cook' the pretzels for about 45 seconds on each side - place onto their baking pans, add the salt or topping and then bake them for about 18-20 minutes. I had my one pretzel with some mustard. I do believe by 9PM all the others were gone! I guess the kids and Greg really liked them.
At that point it was getting closer to dinner but I wanted to bake off the crackers so got those set and baking. Those came out pretty good - I added a Tbsp of my pampered chef rosemary mix to the batter. 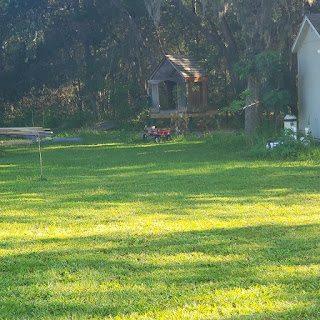 We had to get the top of the 'playhouse' up onto the chicken coop frame as we are repurposing that as the hen house. With Greg's back we were not 100% sure how that would work. I was thinking a pulley system but he was thinking something different. He leaned 3 boards up onto the platform and got the house up against it. The 4 of us pushed the house onto the boards and up and it slid right onto the top! It took less than 2 minutes and no one's back was hurt! Greg and Aidan turned it around so the 'correct' side was facing the house - the run side was set and the back side for cleaning was towards the woods. They can fill in the under part with the dirt today and then building the fencing and door for the coop can begin as well as fixing up the house. Progress.
Since everyone had filled up on pretzels... dinner changed to chicken wings, sweet potato fries and I had gotten some swiss chard and added that to my plate. A game of monopoly and then a little walk with Aidan before the thunder sent us home. The movie The Martian was on so we watched that and that was pretty much my day! Lots of baking, chickens and a little sewing thrown in.
Posted by Deb A at 9:03 AM

That sure sounds like a great day--fun with kids, chickens, baking, eating, and sewing--can't ask for much more than that--and even a couple walks mixed in!!!
luv, di

WOWsers--talk about a busy day there;0000
I spent my day on the other end of that spectrum...a bit of laundry
( s i g h always with us isn't it?) then a bit of bike riding, then a good hour's worth of hand quilting on my Star Spangled and figuring out backing for my 75" long table runner...that will take some doing...

Sounds like you are an excellent multitasker! Those chicks look like they are growing! Glad you were able to squeeze a little sewing and baking into the day, too. Mike was talking to his sister who lives in Ocala the other day and she described going for her morning walk the other day and coming home so sweaty that she was soaked all the way through. Hooray for a shower and air conditioning!

very busy day! and those chicks are growing!! I would love to have chickens but Mike doesn't - afraid it would involve more work for him lol - maybe one day when I know we won't travel much - right now I am hoping we get back to travel next year