Progress on Hoarfrost - UFO for July

I did a little sewing this weekend. I managed to get the inner part all sewn together. Unfortunately.... I seem to have reversed the 2nd from bottom row and after sleeping on it, it decided it really wanted to be fixed. It did not like those 2 light prints together at the bottom. 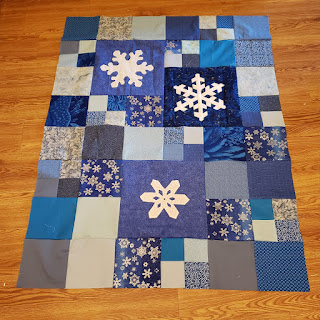 So after unpicking the 2 rows on Sunday and sewing them back together it is much happier. 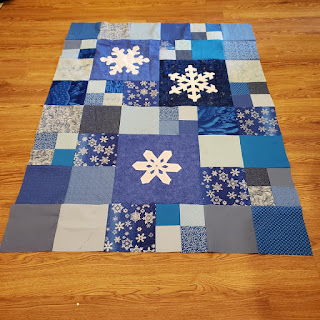 Then I started cutting the gazillion parts for the pieced border. There is to be a white, then a blue border then the pieced border on this quilt. I really don't have enough of the blue print in the pieced border to do the inner blue border... I'm using the bright silver snowflake pattern on blue for the pieced border.... I think I might just make the 2 inners into 1 white border instead? I have enough of that to do it!
I also made a few more masks to send home with Grandma... so the kids have some at her house if they go out and they don't take their's with them.  The colors are off - the top is a light aqua dot, the middle is a teal aqua dot and the bottom is a avacado green. Technically they are mask covers, but little flaps on the top and bottom come up over the chin and nose.  I wore mine in the blue flowered print for 1.5 hours in the Honda service waiting area before it was diagnosed and my ride picked me up. 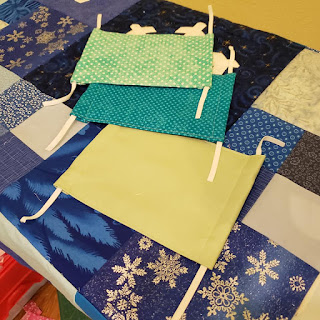 We were to be over at Cocoa Beach today and tomorrow, but then Florida became the COVID-19 hotspot so we cancelled our trip last month. Smart decision as Grandma with sciatic and bursitis, and Greg with his back would not have enjoyed themselves. I was going to just work, but decided to still take today off. The car was shimmying a bit so after delaying some service checks for 6 months, I brought it in today and they are working on about 6 things. I expect a call soon, and hopefully they can send someone to pick me up as I don't think Greg could handle being in the truck for 50 minutes to drive me there and back again. Not too bad considering it is a 2014 CRV with 86,000 miles on it and really has just had the normal oil changes and filters in those 6 years and one gas leak fix. Grandma is returning the children mid afternoon so I better go cut my white parts for the pieced border while I can!
Posted by Deb A at 12:49 PM

we have a honda crv also a 2010 we have 140,000 on ours and have had breaks fixed and a couple small things but overall have not had problems - oh one problem that seems to always need to be fixed is the tire balance - it can be fixed and then a year later again and again - they have checked everything when it was under warranty to see what was causing it and couldn't find anything.
I think you were right to fix that bottom patch you should be happier with it now

Your blue snowflake quilt is looking good--
blues always make me smile--
and yes that one block did need to be turned --so good job!
as for cars--oh how I miss having my own wheels and driving--but it's been years now--what I don't miss is all the repairs that they needed--
luv, di

Blue snowflake will be just so pretty--looking forward to seeing those borders...nice fix on the bottom row--worth taking it out and turning it...
I have a Honda CRV too--love sitting up higher when I drive-much better visibility...
Take care and stay safe...
Hugs in the ole AC again Julierose

Hoarfrost is looking good. Temps dropped to 4 degC last night but we haven't had any frosts yet.

That's a pretty quilt with all those different blues! I really love the snowflake fabric! I'm sorry you've had to cancel your beach time. We're longing for some beach time here, too - so we keep planning fantasy vacations. 🙄 Someday we'll feel safe going again!