A Zoom with Gyleen Fitzgerald

Tuesday night I was able to attend a zoom presentation by Gyleen Fitzgerald on her It's a Polygon affair. It was a really interesting presentation. Turns out she is an engineer and from a 60 degree diamond shape, she showed how you get the pyramid (half), cone (1/4 off the top)  and hexagon shapes (1/4 off the top and bottom). She also explained how they all play nicely together. That was followed by a slideshow of some quilts she designed using the different shapes and how color changes the design. Each of her quilts has a name and a story of how she came up with it which was fun to hear. Sew many possibilities when you add new shapes in the making of quilts.

Grandma called around 9PM. She just got home and is happy to be there. The tests showed her heart was fine and they are puzzled as to what happened Sunday. She is on a 10 day no lifting and no driving.

Lets see - Monday after school Em needed a book to read so we headed to the library to check out a book. Aidan decided to go too. One of the people that worked at their elementary school saw us and commented on how big they were - taller than Mom even! Yes, the boy has passed me and Em is only about 2 inches shorter than me! I guess they have changed a lot in a year and two years!

Today - after picking up the kiddo's from school and dropping them home, I had to go 30 minutes across town and collect some specific cookies for one of my parents. I chatted a bit with the other troop leader... who happens to be originally from Vermont! I've met her once or twice before. I arrived home to Aidan making a bag of mashed potato. Greg was emptying the dishwasher and had turned on the skillet I had the asparagus sitting in some water waiting to cook. Dinner was in the crock pot - Roasted Chicken in the crock pot. I didn't have the herbs so just tucked some spring onions and garlic inside the cavity. Once I took the chicken and carrots out, there was about 3 cups of liquid. I started it with no liquid and love the surprise of it. Half the liquid got made into gravy by Greg and the other half was used to make a box of stuffing by Emily. I guess everyone participated in making some portion of the meal tonight! I have a nice bit of the chicken left over which will be made into chicken pot pie for dinner tomorrow night - thanks Julierose for the idea!

While listening on the Zoom I prepped some green hexagons and got one of them stitched down. 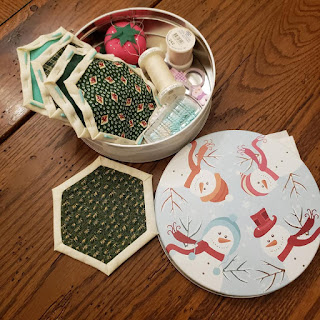 I also cut the parts for the other 3 square in a square units for the Harmony sew along. The first one is completed but I will plan to make 4 blocks for a throw size. 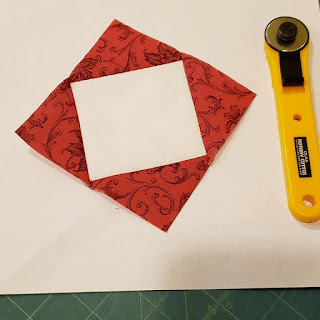 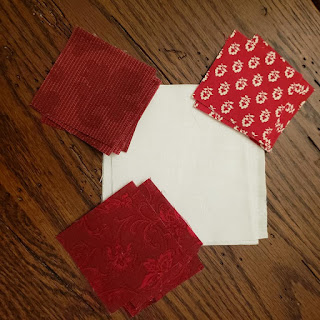 It is 10:30 at night.... and the boy is still working on his Genius Project that is due tomorrow. I know, he has been told repeatedly to get it done before now. By the end of the weekend would have been nice. The report is written. The political cartoon is found and printed with explanation. The 'baseball card' front and back with photo and stats/info on the back is printed (cardstock worked for this one so the photo did not bleed through the paper!). He is working on the bibliography, his least favorite part. Sigh..... let's hope he is done by 11.  The project for his gifted class is due tomorrow and the presentations will be next Wednesday. Honestly.... he gets his procrastination from me so I really can't knock him too much on it but boy.... does he put so much stress on himself when he does this. This is for his Civics class and they are each doing a governor of Florida. He got Farris Bryant who was governor from 1961-1965. The only one from Ocala and Marion County where we live. 10:45 - done, printed and being stapled now. Big sigh of relief.

Your hexagons in green are really pretty...I am still working in blues...
You really have quite a schedule there going on there.

Our chicken pot pie was so good--even the leftovers were!! ;)))

My Varsity basketball star grandson is done for the season with a strain issue..he is so disappointed as this is his senior year. Life can be tough...and my oldest grandson is working on his 4th Acctuarial exam and has come down with carpal tunnel...and my daughter (their mother) is trying to keep them sane ;000 and herself too!! Yikes!!

We are muddling along here...and wishing for Spring weather...
Take care hugs, Julierose

Glad your MIL is home. It's always hard when doctors can't figure out what is wrong. The zoom presentation sounds interesting. Your dinner sounds wonderful, especially with everyone helping! ~Jeanne

I hope the MIL will be well, if the doctors can't find what is wrong one always wonders what will happen next. so nice that all participate in planning and preparing a meal - I get tired of doing it all the time with no help - well be so glad to start eating out again now and then it helps break up the "what to eat" of cooking every day

love those reds---and you sure seem to have little adventures with your family!!
luv, di

Gyleen was at our guild a number of years ago. Ten, maybe? Fun lecturer!

Neat that you could join in on that Zoom presentation! Your hexies are coming right along. So far the Harmony pieces have been quick to piece, too. Dinner sounds yummy and what fun to have all that help! Glad to your MIL is doing well.