With a picked up sewing area, you would think I got some sewing in this week in red! Nope, but I do have some reds cut out to make some houses later today. You can see the UFO - grandmothers choice blocks are on the floor laid out to be sewed into a top. They were getting their sashes added to some blocks yesterday. The pink house is what those red strips will become. 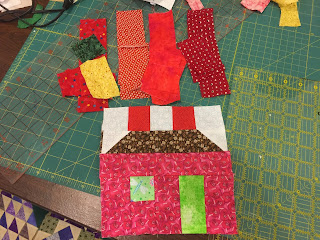 A shot of all my houses this year. Only 4 have the wonky surround on them. They all will eventually get that added - some going up and some going down. It is a bright and cheerful neighborhood - which just needs some red, maroon and yellows added I think. A neutral one or two might get added as well. 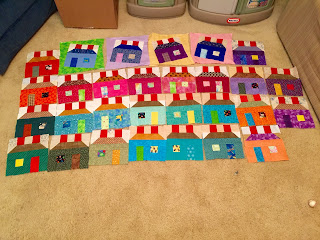 It has been a busy week.

Monday was spent clearing the kids play room out to become my office... and move some things out of my sewing area and into that new office space.
Tuesday was back to school for the kids and to work for me while they were at school. That night - we split up and Greg took the kids to soccer practise and I hit the open house for Emily at school.
Wednesday - school/work and lots of homework... then I had a girl scout leader meeting that night.
Thursday -school/bowling for me, then the standard homework and a first soccer game. We lost 8 to 1... and Aidan played goal for the first half. A big net this year but he made some great saves. Not too shabby with only one practise for my kids (we had an open house for the other kid the first practise day).
Friday - school/work - clean the house up a bit and then make dinner and a Skype call with Grammy and Grandpa R... and Uncle David and Aunt Donna stopped in right before we got off the Skype call with my parents. The kids got to say hi to both (last saw them in July when we were up in VT) before we threw them into bed (late night Thursday so tried to get them in bed 7:45 last night. Didn't do too bad.
Saturday morning - Emily has a bowling meeting then her first day of bowling on a league for kids. Aidan will head to a new boy scout troop with his Dad to check it out. This afternoon Grandpa A will come for his weekly visit and then..... I hope to till the garden space and then sew! Oh, I told the kids after they clean the guinea pig cage and vacuum up the living room I'll get the other box of fall decorations out for them to finish transforming the house!
Sunday - will become Grandma day for the kids. Greg asked when she wanted them that day and she said early.... somehow 5AM came up! I'd be happy to get up at 4 to pop the kids in the car at 4:15 to get to her house for 5AM....Think she was serious???????

Linking up with the RSC Challenge. See how well the others did with playing with their red scraps this week.

Those houses are always fun to see, and I love the wonky setting you're putting on them, too! That will be a happy quilt!

That *is* a very cheerful neighborhood! Sure to be a cheerful, happy quilt.

What fun to see all your happy house blocks!

Fun houses you've made. I'm thinking of doing a house, too. But I've had so little time to sew the last weeks. Always hoping it will be better tomorrow.

A bright and cheerful neighborhood, along with some RED for some new construction. Keep up the good work in spite of your busy week!!

I love your happy little village!

Those are such wonderful colorful houses and I love the tilty background!

Thanks for showing the neighborhood. It is so colorful and will be even livelier when it becomes wonky. Good luck with the Reds.

Everyone's neighborhood needs to be this cheerful! Love the wonky blocks, will make a great neighbor's quilt!

Such cute houses. That will be a fun quilt when finished.