The Sunday before Christmas.....

I had in my head I would work on finishing up the kids crochet and knitting projects I started for them last year. Did you know, if you want to make progress on something you actually have to work on them? I seem to have forgotten that little part of it! Oh well..... they have waited this long.... what's a few more months?

Emily's is probably pretty close with her crochet afghan. 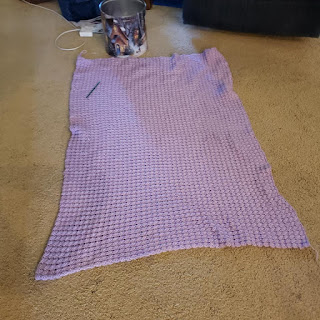 Aidan's knitted sheep pillow.... lets just say I am still not comfortable with the changing of yarn colors to make the sheep. I really just need to sit down and figure it out! 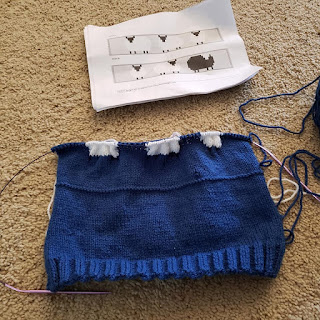 I have been concentrating on hand quilting book club - and just have all the sashing and cornerstones to finish off then add a binding. The 9 blocks are all quilted. 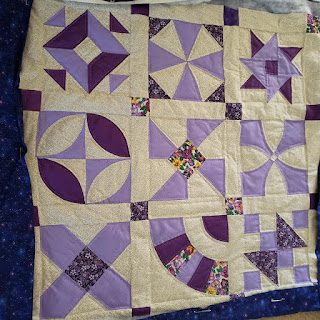 I watched 2 movies last night - you would think I would have been working on something... but no! I did not. I watched The Nutcracker and the Four Realms with Emily, then we made cookies. I put on Godmothered after that and was half watching it. I need to really watch it again as it was a pretty good movie! I hear it just was released this month and was able to watch it on Disney Plus or whatever their viewing option is bundled with Hulu. I plan to watch the original Parent Trap this week - love Hailey Mills movies =).

I decided to start something new in December.... A puzzle! I got it out after Thanksgiving and started with a 500 piece one. I mostly was the one doing it. I kept the dining room table extension in and put it out on that.... plenty of room to still use the table to eat, and I could sit and add some pieces in here and there. I was missing one piece and had an extra.... won't mention how long I was looking to figure out where that red piece went before I realized it was an exact duplicate of one already in place! I have 2 1000 piece puzzles and asked Aidan which one to do next. A ocean scene with animals. Both kids have put in a few pieces but he has helped the most. I think our minds are similar with 'seeing' the pieces and where they fit. 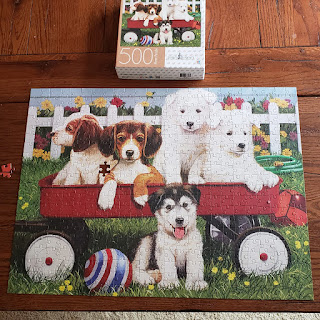 I still have one Endless Diamond block prepped - it is number 20! Hmmm. Maybe 5 more (25) for a 5x5 setting and 60x60 throw? We will see. I hope to start on that block while at horses with Emily on Tuesday. I opted out of riding for her on Saturday... she was not happy with me at all! We took her to the Dr. on Tuesday this week after a fever Sunday/Monday and that was day 3 of a sore neck. Infected lymph node and some good antibiotics later and she is better but I didn't want to push it with the neck and horses until the antibiotics are through this Tuesday.  She is much better though, now. On the plus side... the kids and Greg finally finished putting up the outside lights out front yesterday. 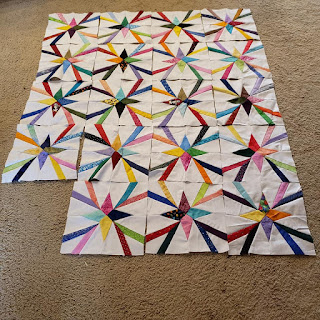 Linking up with Kathy and the other slow stitchers this week. We are off to Grandma's for her 'Christmas' at her house. This is 'her' favorite holiday so she goes all out! May you all have a safe and happy Christmas Week.
Posted by Deb A at 11:29 AM

I love the Endless Diamonds quilt! Sometimes you just need to kick back and watch tv with nothing in your hands. I have to watch It's a Wonderful Life every Christmas. I haven't seen the ones you named, but will see if they are on Netflix.

Your kitty curled up in your sewing chair brought back sweet memories of my Buddy who passed this summer. He was spoiled too, but he made up for it in love.

Both your projects are coming together so well..
I took yesterday and today away from my sewing room...just, well, needed a little break...
Watching the Patriots game (they are so bad this year!! I miss Brady!!)
Anyway--we plan to eat an early dinner--my leftover chicken pot pie and a salad...
May work on Butterfly this afternoon--my energy is low today...what a totally weird year...
hugs from the frozen tundra here...Julierose

I love the quilt in your header photo! I have a pattern for a wall-hanging with cardinals in it - need to make that one of these days. Glad Emily is better, and your puzzles sound like fun! Have a fun day with Grandma and, hopefully, a little slow-stitching, too!

I love the quilt in your header too. The Endless Diamond Blocks I congratulate you on making. Looks too scary for me! Happy Holidays!

Endless Diamonds is really going to be a beauty! You know, I guess the reason that my SAG Medallion is not finished is that I forgot I have to applique it! LOL. Have a great day!

Endless Diamonds is looking so good!! you are doing a great job on it. Glad Emily is feeling better and probably was good to skip the horse one day

Oh, I thought Christmas Elves snuck into our homes and magically finished all our WIP's. =) Your Endless Diamonds is a gorgeous sight. I too, love Hayley Mills' movies. I love this time of the year re-watching all those Christmas movies.

Michelle Hunter is now retired but has left her website for all of us to enjoy. Check out her video tips at knitpurlhunter(dot)com . She has some help for changing colors of yarn among other things. ~Jeanne

Endless Diamonds is so pretty! I love the secondary pattern formed in the corner of the blocks.

Both your quilts are looking so lovely and sounds like you have been very busy. Looking forward to seeing your progress. Happy quilting,Melisa

I am also still finishing off some Christmas gifts...
Endless diamonds is spectacular!
I just learned to knit this year...I have not tackled colour changes yet.
Glad Emily is feeling much better.
Merry Christmas. I hope you get your projects done!

That reminds me to get out my puzzle..we try to do one every year at Christmas!

You are making great progress on your hand quilting which is amazing with everything else that you've got on the go!