We tried the Chicken Tikka Masala tonight and it is a keeper recipe! We used this one and had to buy a few items - tumeric, garam masala, naan and I needed rice so I got some Basmati this time. I did get the cilantro but we forgot to add it at the end.  I had tomato sauce, chicken and the other ingredients on hand. I need to remember to pick up another tube of grated ginger as we used the last of it.  The one thing I missed was the heavy cream.... so we popped over to Winn Dixie and picked up the Cuban bread for tomorrow night while we were there. They have the best cuban bread.

Aidan pretty much made it all.... I only did a little chopping and prepping of the spices in order of addition while he was charing the chicken.

I remembered to take a photo after we started eating!

After everything was picked up and put away, I headed outside for some fresh air and found some friends! 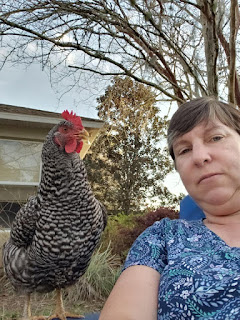 DC was not cooperating for photo's so I did not catch myself with a smile. 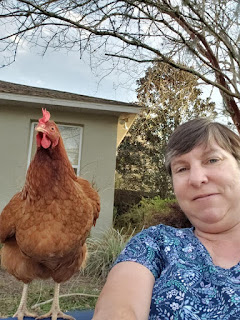 Lily hopped up after DC jumped down and she was a little better at the photo taking. They were scattered over the yard until I got up from the chair to go inside and then they all came running to the back door. All 9 of them. Silly girls.

Tomorrow night we visit Cuba (hubby loves cuban sandwiches!). I'm using some carnita meat from last week with the cuban bread, ham, pickles, mustard and swiss cheese. I have a cast iron press with my grill pan that we use for these. I'll soak some black beans overnight and make a batch of Cuban black beans to go with it and we had a bit of extra rice that will work with this meal for tomorrow.

supper at your house sounds interesting- can I come over LOL

We love Chicken Tika Masala! Your recipe is a little different from ours, so I'm going to save it and give it a try. Thanks!

So glad that turned out to be so tasty! Way to go, Aidan, being the cook, too. I saved the recipe so we can try it sometime. Do your chickens like to be held or petted? I'm always curious what their feathers feel like!

I am enjoying your trip around the world. Sounds like you are having a fun spring break.