August 1 and no completed QSAB for me. 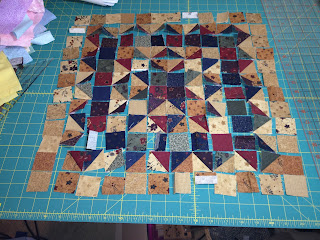 but I after dropping the kids off to Grandma I had to head to the store for an interview.... run some reports and then hit the bank. Then it was bring the car in for an oil change without an appointment. That took a couple of hours so I just headed to pick up one child from Grandma (the girls are having a sleep over) around the normal time of 4:30. Had to hit the grocery store on the way home for dinner and by the time dinner was done it was 7:30PM. So much for getting home around 1PM so I could sew up my block!

I did bring something with me and was able to get this QSAB finished with the hand quilting and then started knitting on a dish cloth... so something got done today while I sat waiting for the car for 2 hours. 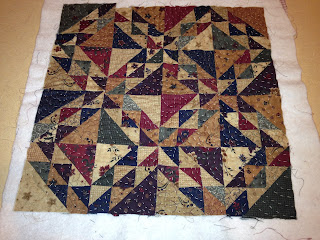 Hopefully I can sneak in some sewing in the morning with the boy before doing some fun things  together before his sister arrives home at nap time.
Posted by Deb A at 9:56 PM

Your blocks look great even though not finished! I remember how hard it was to get quilting time when the kids were young. Hope you find some time soon! ~Jeanne

Your block looks like it is ready to go as soon as you have a few minutes. At least you crossed all those errands off the list.

This is my favorite block so far! Love the quilting...and it must have been tricky through all those seams!