Yesterday, my 17 year old Sophie cat passed away. We knew it was coming. She had stopped eating and was getting weaker and weaker. Her kidneys have been an issue for a few years but she appeared happy and in no pain so we let her go on her terms. Up until yesterday she was still purring when we petted her. She is buried out back next to Maxie cat - her sister that passed 4 years ago.

This morning we had a opossum in the cage. Greg released it but upon further research it is probably what got Fred the chicken. We will try to capture it again and rehome it far, far away. It was a cute little bugger though. 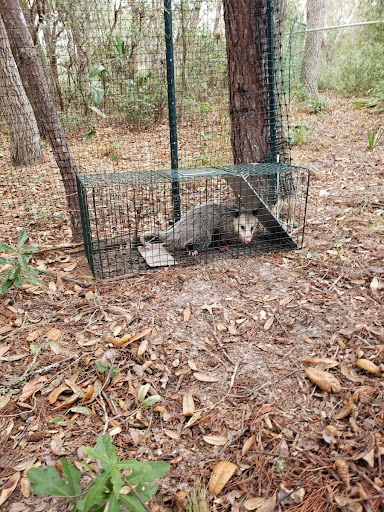 3 sets of 12 groups of hexagons are put together. I have 5 sections to go. Now that I know how they go together it is moving along pretty quickly. I also might have spent a lot of time in the living room with Sophie stitching on Sunday. 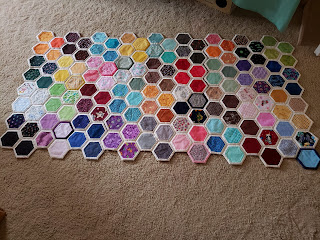 Sorry you lost your kitty. My vet told me that kidney failure is the main cause of death for older kitties and that's what did my 18 1/2 year old Tiger in years ago. Hugs. Yep, the opossum will definitely take the chickens given a chance. Good luck catching it again.

Sad for you about your kitty crossing the Rainbow bridge !
But I know she had a great life with you and loved you as much as you loved her.
It seems to be a big time right now as so many are losing fur balls--cats and dogs since the beginning of the year--Sad! even here I know of 3 pets that have crossed the bridge since Christmas-
here's a hug --di

I'm sorry to hear about Sophie, Deb. It sounds like she had a very good life with you - lots of love! And an opossum - wow! That is a different sight for me. I hope he doesn't go after any more of your chickens. The hexies are looking prettier and prettier as you get more together!

you are the second one to mention loosing an old cat today - it was just time at 18.5 years! I never had one get that old.
Releasing the possum further away is probably a good idea - we have done that now and then and we are lucky to have so much forest land in our area - we usually drive about 6 miles away to a nice forested area to drop critters off.

We are exhausted here after chasing down a date for my shot--the only scheduler is out sick--8 phone calls back and forth later...it's not only the supply chain that is down, it's the people chain too...and so it goes..

Your hexies are coming together nicely...hugs, Julierose

So sorry to hear about Sophie. Pets are part of the family - so hard when they leave us!
On the other hand - opossums are NOT cute. ;-) Best to re-home them, especially if they've discovered the chickens.

So sorry to hear about Sophie... it's always so heart breaking to lose a fur baby that has been part of the family for so long.

So sorry to hear Sophie passed. You are not alone, our pup crossed the rainbow bridge two weeks ago after 14 1/2 years as a member of our family. There are no words for your loss.

Hi Deb, your header is gorgeous, btw. I love those hexagons and I've bought one of those cutters to get busy with them one of these days. Meanwhile, so very very sorry to hear about lovely Sophie but it is no small matter to say what a marvelous life she had with you. Find comfort in that fact too.
I would have loved to have seen that oppossum as I've never seen one (and don't know how to spell it either).

I am so sorry about your sweet Sophie; it is so hard when a fur baby leaves us. Sending you hugs. Your hexagons are looking amazing. It is so much fun to see them grow. Happy quilting.