Where did the day go?

The kids opted not to do the Santa Breakfast this year and instead we did creative pancakes with chocolate sauce, sprinkles, whipped cream, cinnamon sugar and powdered sugar and cherries on top! Served with hot cocoa of course. Then it was off to bowling for Emily - someone else was acting up this morning and stayed home. (Dec 9..... at least it held off a bit this year!) We hit the store after and I was smart and picked up a jalepeno and some cilantro...... which came in handy later today.
We had lunch and visited with Grandpa A. Then it was time to head outside..... Emily and I power washed some more of the driveway and put some of the outside lights up. Aidan and Em also decorated the swing set out back! I got  a little walk in as well and hit my 10,000 steps before 5PM today!
The kids had a bonfire out back tonight and had some hot dogs over the fire. I decided to use up some leftover roaster chicken and some of the things I purchased earlier to make Mexican Chicken Napoleans (or a version of it) with some fresh salsa. Yummy! 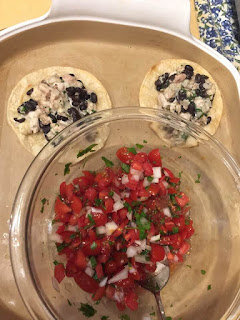 Unfortunately, I did need some patching up as I pulled  out my chopper and it was put away with water in the bottom.... so when I was trying to clean it I sliced my pointer finger on my left hand. Hubby was there so he got to patch me up with a band aid. I'll survive... but we will see if I can hand quilt with it later tonight. I might need to just press a backing and pin a quilt instead! I got the top to my spring blossoms done a few weeks ago and have the backing pieced. It just needs to be sandwiched and quilted.

Maybe that will wait for another day. Emily wants to make a craft... so I'll see how quickly we can do this before her bedtime... then I can collapse for the night!

I hope your finger heals really quickly. Quilters need all of their digits in good working order!