RSC - finishing up dark blue with some Sweet Confetti blocks.

I could not figure out why it was taking so long to make these blocks last weekend. Turns out... I cut out blue parts for 14 blocks instead of the normal 10 I do! Oops. I had to cut some more white parts out to finish them off. Always good to have extra blocks, just in case.
Linking up with the Rainbow Scrap Challenge on Saturday morning. 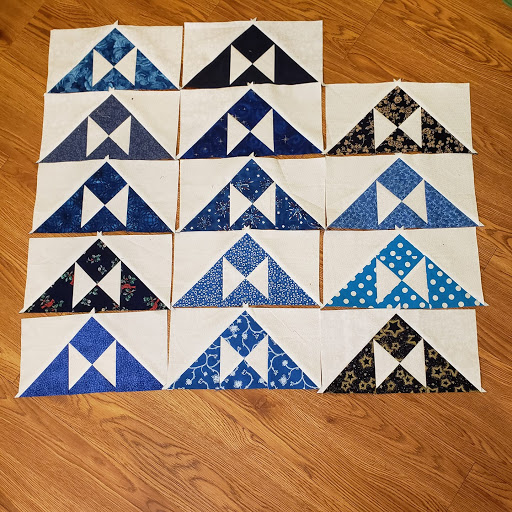 The chickens have been evicted from the house and now reside in their coop at night and in the run during the day. They put themselves into the coop about an hour before we shut them in for the night. They were quiet Friday morning when Emily and I went out to open their door. I guess they like their new house. They have been taking dust baths in the dirt.. which is so funny to watch. They sure do dig well! This is Aidan's chicken in his hand....Emily calls it Lilly and after calling it 'Aidan's Chicken' for 5 weeks he is thinking it might be Chickalota. We will see... but I think Lilly might stick to her. Yes, those holes in the top will get tacked down this weekend. 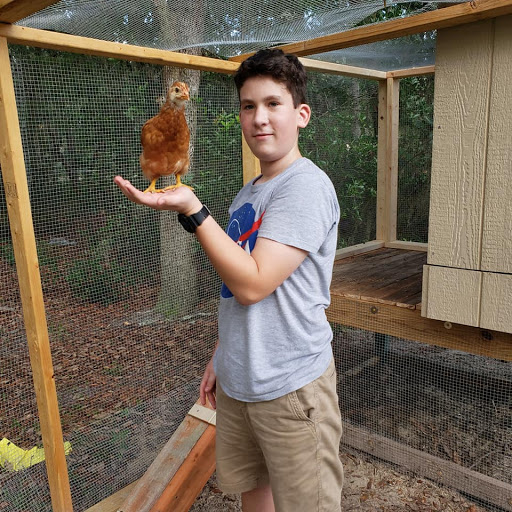 Nice collection of blue and white blocks...
great picture of Aidan and his chicken;))) made me smile...
hugs from afar julierose

your son is a nice looking young man and seems proud of his chick! love the quilt blocks

Lovely collection of Dark BLUE blocks, Deb. I notice the Dark BLUE in Aidan's NASA shirt, too! Did you plan that?! LOL

Ohmygoodness - Aidan is looking so grown up!

Love your blue confetti blocks! But even better is the picture of Aidan with his chicken! Will he still be able to hold her that way when she is full grown? :) Glad they like their coop - that must be a genetic behavior to go into the coop to roost at night.

Hi,
Beautiful blue blocks...glad to hear the chickens
like their new home...have a great day!

Pretty dark blue blocks. Looking at them I can see a bunch of blue shirts sporting white bow ties!

Aiden is so grown!

I love having chickens. Hopefully they continue to bring you entertainment.

Your blocks are beautiful.

Those Sweet Confetti blue blocks are so pretty. Aidan is really growing into a good looking young man!
Did to get to comment on the Umbrella quilt - you did a fantastic job on it! Very pretty

That can't be Aidan! He looks very grown up all of a sudden. Those confetti blocks looks like shirts with bow ties.