I don't know why I put certain things off. Usually, they are not as bad and don't take nearly as long as I think they will! Example - fixing the batting the kittens scratched up on the frame last year. It ended up taking me about 30 minutes.... yet I put it off for a year! I am a master at procrastination!

This time.... it was the midget applique quilt border. I have been putting it off forever! I decided this was the month to make progress and made it my One Monthly Goal. I put it off again, well I did make a bunch of vines with my bias binding maker 1/4 inch. They were sitting on the sewing table for a couple of weeks.

I was on  a 1.5 hour video staff meeting yesterday after lunch. (I did have the camera on for the beginning until Peanut made my boss burst out laughing while the VP was talking as he walked across the keyboard... twice! I turned the video of me off after that and just watched them and listened... and stitched!) I finished piecing the white edges to 2 of my endless diamond parts and then attached them to the middle section. 12 blocks completed and I love how they are looking. 36x48 is the size right now.... it will get bigger. 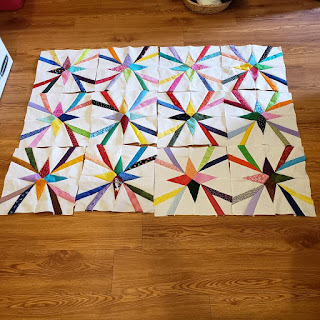 I had pulled some fabric for flowers during lunch and worked on making some yellow circle centers and multi colored flowers and circle flowers while on the call.

Since there was a hockey game last night... I knew I needed hand work (go Lightning - who will see Dallas in the Stanley Cup Finals!). I laid out the midget quilt and put the border along one side. I played with how I wanted the vines and used a few pins to attach them to the yellow border. I got this one side stitched down during the first period. I guess I should have prepped the top as well.... 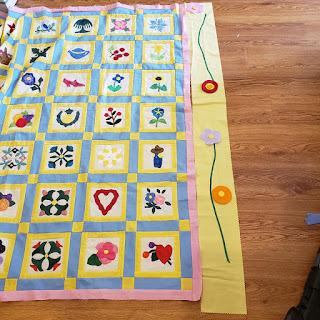 I'll stitch down the flowers in bits of time here and there and will be making a bunch more. I am thinking I need 5 or 7 flowers for each corner. I probably need to add a few leaves as well. Hindsight.... I guess I could have used a little vine sticking out of the curve as a spot to put the flowers.....but maybe I'll have to tuck some leaves here and there along the vine and near the flowers. Still a work in progress but it is moving forward.

it must be funny having zoom meetings sometimes :) love the quilting projects

You are moving right along--I like the little flower borders in progress...
Taking a rest afternoon here after the dreaded grocery run this morning...why does this tire me out so much? S I G H ...

Anyway--a decision has to be made whether to just use 80 CS blocks or to continue on to 100...I still have strips left--just mixing colors is getting a bit harder with these last ones...
I hope you have a great weekend, Hugs, Julierose

Great idea to turn the camera off in a zoom meeting and then stitch! I do love your endless diamonds. The border for the midget quilt is looking great. I have come to the conclusion that anything that gets done during this pandemic is progress. So take as long as you want! ~Jeanne

Don't we all do that - put off the simplest jobs forever and ever?! But every little bit of progress counts! Endless Diamonds just gets better and better as you add more blocks. And I love what you're planning for those borders, too!

The flowering vines will look good on your quilt and the Endless Diamond blocks look great laid out to create the alternate patterns.

Yah for meetings that you can stitch through! I love that about zoom meetings/workshops.