My One Monthly Goal is to make Aidan's quilt (Twilight Hopscotch by Kim Diehl) longer. Someone got taller and the 61x61 it was seemed to be too small according to him. It is now 89 inches long..... we will see how that works for him! I opted for adding 2 rows instead of the requested 1. He is only 13 after all and still growing..... he has not reached the 6 feet I expect him to hit in the next year or two. 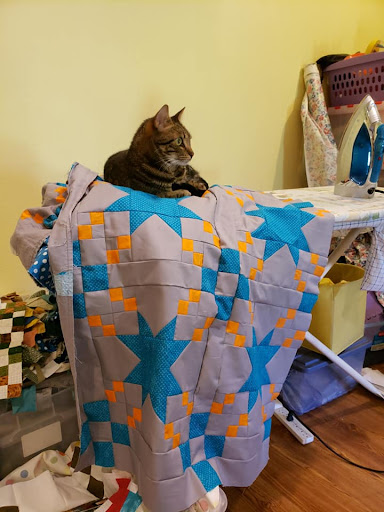 My handy helper holding down the parts while I was organizing today. I zigzagged some extra batting bits together. Then I zigzagged that onto the existing quilt. Then I added the backing, while tugging that batting out of the way. Then it was moving the cat and pulling back the batting and batting and machine stitching that top to the existing top. Done. Then I laid it on the floor to pin it for the quilting. Let's just say washing it will hopefully help make those issues not as noticeable =). A quick squiggle quilting following what I had originally done. Then.... I made a teal binding and attached it by machine. I see I hand quilted inside each of the teal stars in orange..... so I have 8 of those to do along with hand stitching the binding. 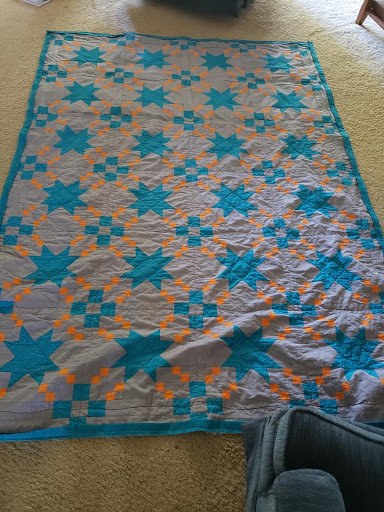 That will be my slow stitching later tonight. We will see if I have to do the kid pick up or if hubby will do it this week.

Linking up with Kathy and the other Slow Stitchers.

that is great how you were able to extend the quilt to the right size - yes he is at the stage of growing like a weed.

That looks great, Deb! I'm so impressed with how it worked out. You'll probably notice where you joined the new part to the old, but nobody else will.

What a great idea to extend the size of a quilt! And plenty of time to finish before the end of the month!

I love his quilt. The extended size is perfect. -Jeanne