This was my view Tuesday night. We got a new couch (and I got a recliner!) and Emily was testing out the recliner in the couch while we watched Turner and Hooch. The original with Tom Hanks. I saw on Disney + that there might be a new version out. Bear likes the new bed. He even let Emily use his quilt! 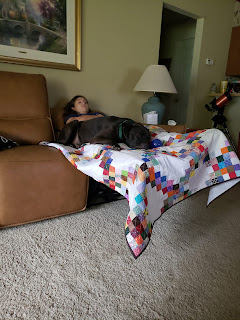 A pretty yellow butterfly was enjoying the purple flowers one morning after dropping the kids to school. 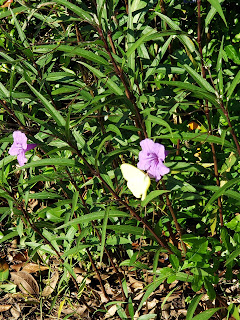 Today I got a little time in the sewing room and cut out my 20 orange triangles from the orange scrap bin. I had them mixed in with the brown scraps. Peanut wanted to hold down the parts for me as I was trying to sew. This was before the thunderstorm when he went and hid behind the washer. He dislikes thunder and it was quite a storm for the second day in a row. 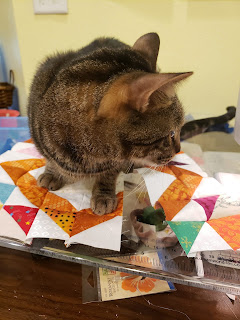 The completed block. I need to make one more in orange, but I am not sure if I should try the light batiks or the bright oranges. 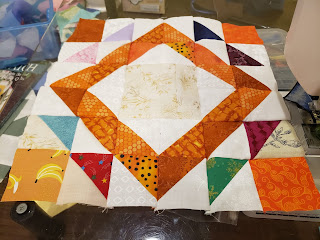 Greg picked up a brisket at Sam's on Monday night and he had it in the oven all day on Wednesday. It was very yummy. I picked up bread this afternoon and I think it will be paninis with the leftover meat that was not sealed and popped into the freezer. I have some brussels sprouts that will get roasted in the oven as a side I think.
Linking up with the RSC on Saturday.
Posted by Deb A at 5:11 PM

What a pretty orange block--I love it!!
Our refrigerator [and freezer in it] just stopped working -we think about one o'clock-- but as neither of us had any reason to go into it, we didn't notice until 4:30!!
I think all the diary and Mayo and stuff will have to go and of course any frozen meat was totally thawed too!! $$$$
We tried to get a repair person, but they said they couldn't come until NEXT Thurs,!! Right--so Tom as a last resort, unplugged it and then plugged it back in and it seems to be working--getting cooler--but I don't trust the food that thawed and sat for over 3 hrs....
It's only 5 yrs old--an LG...we will empty it tomorrow...just too stressful tonight...you never know what will come down the road, do you?
Hugs, Julierose

So exciting to get new furniture! Of course, your girl and her dog had to check it out, with quilt, too! That's a pretty orange block - I really like those. May need to put them on my list just for next year.

great to get new furniture isn't it. I really wish we had gotten a recliner or two when we got our new furniture some years back - it might be time to rearrange and get rid of the love seat and get two!

I love that block using the triangles like that. Very striking!! I'm guessing the new couch and recliner have received passing grades from everyone in the house. Looks comfy!!

That's a great block for an RSC project. Hope school is going well for the kids. How relaxing to have a new recliner in the couch!

New furniture! Glad everyone is enjoying!! Turner and Hooch....we need to watch that again! Do you use HST blocks or cut triangles in your block? Si pretty!