Saturday was an afternoon in the sewing room. Due to the thunderstorms - I was able to pin my Sweet Confetti quilt without a cat helper. Peanut dislikes thunder and was hiding. He did venture out after the storm and decided to be in the quilt before I started quilting it. He finally moved, so I was able to add some simple quilting of a wavy line every 4-5 inches or so. I hit the end of my roll of Warm and Natural Batting. Sigh... I was hoping it would last another month or so before the good sales the end of November. I have some extra cuts still to piece together for another quilt or two I think. 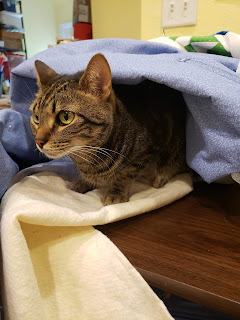 After quilting, it was time to pull fabrics to figure out the binding color. I pulled Emily in first and she immediately discarded the bright green and yellow. She said the pink worked best of the 4 options I gave her. She said to ask Aidan though.... so I went and got him. He said none of the above and pulled the gold yellow and bright blue as options..... then mentioned white would probably work the best. Emily agreed. So.... a white binding it is! I was leaning toward the pink. 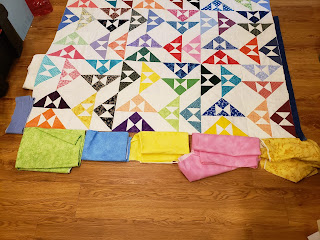 White binding got made after dinner and attached to the front. 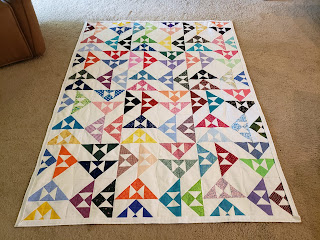 Now to stitch it to the back later today. First up - the house really could use a clean as I swap it over to fall. Maybe I'll actually put up my new quilt hangers and hang some fall quilts while I am at it! 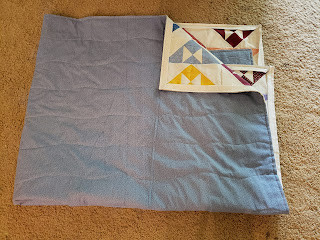 Linking up with the Slow Sunday Stitchers.
Posted by Deb A at 11:49 AM

That is a pretty one, Deb! It can be hard to pick binding for a rainbow quilt, but wow! the white really works. How neat that your kids weighed in on that! Enjoy your stitching today!

Congrats on this finish. Love the white binding too. ;^)

Great that you've finished a quilt--and I also like that white for binding--I would never have picked that, but it looks great!! Hugs, julierose

Very nice to have assistance picking out the binding fabric. Your quilt is lovely! Gail at the Cozy Quilter

Congrats on a lovely quilt, and on having such great helpers, even Peanut the cat!

Lovely finish! Our cat doesn't like loud noises either, thunder would be particularly frightening, I would think. While you are thinking of putting Autumn wall hangings up, I really should replace my winter ones with spring.