So, there seems to be a hurricane possible in the near future for Florida. Of course, my priority is to prep a quilt for hand quilting!

Honestly, we have most everything we need already for any potential effects from the storm. We were missing a camp stove and propane tank converter, and rectified that after Michael went through a few years ago. We have yet to lose power from a storm in the 11 years we have been here. Neighbors a few streets up were not so lucky though. We will fill jugs with water closer to the timeframe as we have a well and if we lose power that does not work! We have plenty of food - pantry, fridge and freezer. (Yes, we have a small generator that could be hooked up to the freezer and fridge and the gas to feed that). It is a nice feeling that you are pretty prepped so not much to do other than clear the yard closer to the time and if it does head inland a little stronger we can board up a few of the windows in the master bedroom. Right now, it is possible to hit around or above Tampa which is closer to me although we are a good hour inland from there and north in the south part of Ocala. I'm sure it will keep changing every new release of the track until it hits landfall. Might it keep moving north and west? Best to be prepared, though.

I pulled out two quilt tops and a wide backing fabric I had. I cut a backing for each of the two tops (Hoarfrost and Bear Paw). Then I pressed the backing and top for the Bear Paw and got it pinned for quilting. I have had this quilt for over 20 years waiting for my hand quilting skills to be where I wanted to do the feathers in the open spaces on this.  I think I made this in the late 90's or early 2000 at a class at Yankee Pride when it was in the Winooski Woolen Mills. Today I marked one of the circular feathers in pencil before pinning so it should be all set to start a little hand quilting on it later tonight. Hopefully those marks will last for me to quilt it and will erase away. I know I had a water-soluble blue marker but darned if I know where it is!

The quilt is 40x60 I think (I measured them both and can't remember but I think Hoarfrost is 50x60 or 70). Backing and a crib size batting for hand quilting all smoothed out. 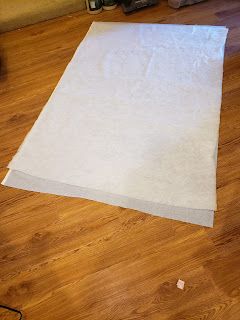 Added the top to the pile. 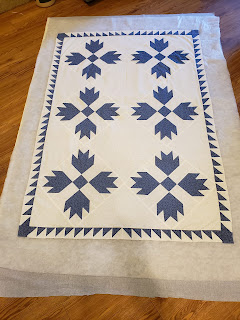 The hand quilting design... does not show up well in the photo. 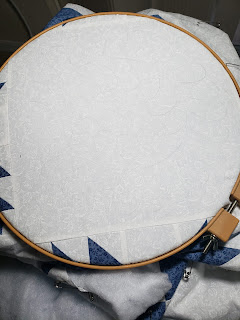 Edited - the first few stitches added. We will see if I regret the blue quilting thread! 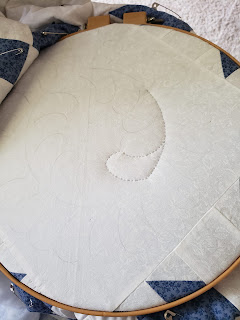 We stopped and picked up Culvers for a late lunch so we will see if the kids are hungry for dinner or not. Guess they were hungry and the pork loin was thawed.... so pork schnitzel with twice baked smashed potato and asparagus was dinner.  It has cooled down slightly outside so time to go weed a bit before it gets dark.
I'll link up Sunday with the Slow Sunday Stitchers.
Posted by Deb A at 6:43 PM

A hand quilting project sounds good in case you are affected by the hurricane. Fingers crossed that it doesn't amount to much where you guys are! I love Culver's hamburgers - that sounds good!

I think you have your priorities right!!! I'm thankful you are prepared. (Having lived within 5 miles of the Florida's coast, I know how important being prepared is.) I'm glad you have plenty of time to get some hand quilting ready I hope you don't see and effects of the storm.. ~Jeanne

Hope that hurricane goes around you!! But glad you are prepared for those types of events...
That is a really pretty quilt--enjoy the hand quilting...
hugs and good luck Julierose

I think I am prepared too-even the water--I only drink bottled water--purified water and last week I stocked up on some when I had a ride to Publix--and I have kept food supplies on hand for a while now--they say the stores are out of water here on the east coast!!!
and I pretty much always have hand work on hand and am always working on a hand quilting project--this week I started a Hexagon top--Grandmothers Fan so have that to work on and I am always knitting--so best of safety to us both--keep my chickens safe!!!!!!!
hugs, di

I’m glad you are ready for the storm. Hopefully, it is not too bad in your area. At least you are ready to keep yourself occupied!

Good luck on the storm, sounds like you are well-prepared! Your quilt is beautiful!

How scary waiting for a hurricane go arrive! But you seem well prepared, I must say. Hand work waiting for you to work on plentry of food and supplies, a generator if the power goes off, guess it's just a waiting game. Hopefully the threat is over now for you.

I have always made sure to have a hand-stitching project to do whenever hurricanes have threatened Long Island. We don't have a generator, but the last time we lost power was Superstorm Sandy. I am hoping that Hurricane Ian gives you a pass. Enjoy stitching that pretty quilt.