I grabbed a quick block to make this morning as I only had about 35 minutes to play in the sewing room. This one went together very easily and I didn't need to think as I pulled scraps to make this one.
I could see this as a bigger block made into a real quilt.... Hmmmmmmm. 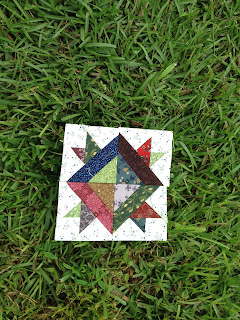 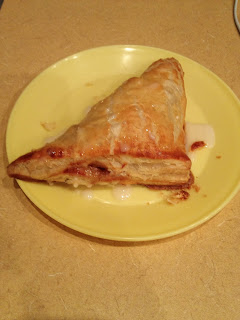 I have to thank Cathy for letting me know how she makes the turnovers she posted about a few weeks ago. Last night was the night - I made some apple filled ones. They were very yummy! I just cut them up into chunks and put them in a skillet with some butter for a few minutes. Added some cinnamon and brown sugar and a little corn starch and cooked until soft for a few minutes. At that point, two kids popped their heads up in the living room asking what smelled so good and could they have some! After letting what was left cool, I put a spoonful into the puff pastry square, folded it over and crimped the ends. Baked in a hot oven for 20 minutes and added a powder sugar glaze to the top. Did I mention how yummy these were?

Love the happy scrappiness of your block.

That turnover does look yummy!

I'm not sure what I like best - the turnover or the block. Or maybe both! Gorgeous block.

Great looking block AND turnover! Your description was making my mouth water! I agree, the block in a larger version would also be good for a scrappy quilt.

Love your block! IT would look fantastic as a larger block. The turnovers sound wonderful too! ~Jeanne

Popover, block, popover, block ... I LOVE both of them!!!!
Sweet post :) Must try those yummy popovers.