I had hoped that blue would come up for July. I had made this one block from a packet I had purchased at Joanns many, many years ago - late 90's or early 2000 range. It was in the discount bin with instructions and fabrics included. I found it  earlier this year and decided to attempt the round robin that was happening around blog land but I only added the first round of a checkerboard. It was around 15 inches square.... a good table topper size.

Being gone on Vacation away from a sewing machine for the first half of the month had me in a bit of a scramble coming home. I had this in mind as a topper assuming dark blue popped up for July. I found a backing and decided to add some hand quilting to it. Today I found a plain dark blue and made and attached the binding by machine to the front and then by hand before dinner. I think it turned out pretty cute. 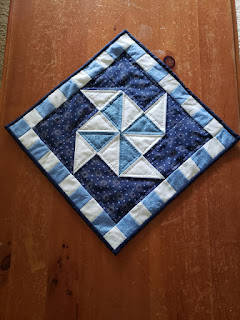 Linking up Saturday with the RSC and on Friday with Joy at the Table Scrap Challenge.

That makes a great tabletopper, Deb! I love blue and white together. Good way to use up an orphan block!

that block reminds me of a whirly-gig - cute!

Hooray for a quick TABLE SCRAPS finish, Deb!! Well done on a good use of an orphan block.

This is adorable and what a fun piece to decorate with through the year. I too like to take random blocks and make cute little quilts. Happy quilting.

A terrific finish for the blue month!

I agree! Love the blue and white whirligig! It’s a great table topper!

You made a beautiful topper, Deb.

Way to go! Finishing an orphan into something useful and cute to boot! It’s just adorable!

Very cute table topper, and hand quilted too! Isn't it great when an orphan block finds the perfect home?

That is a neat table topper. I like the block pattern - lots of movement. ~Jeanne

Your beautiful table topper is darling! Way to find an orphan block and put it to wonderful use!