I just had a feeling that this month would be orange. That leaves black and brown and some other color I have not thought of for the rest of the year....

In between attempting to put a few things away in the sewing room (or disaster area as my hubby calls it) I reached into the closet and scraps bin and pulled out orange. I had a little more than I thought but still not too much. I should be able to get some pinwheel and Birds in the air blocks out of this. 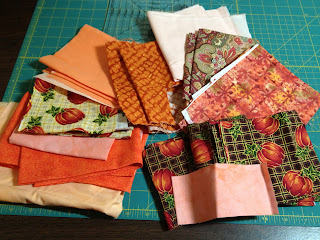 I think I may make a few pumpkin place mats this month as well..... What are your plans for the orange month? Head on over to SoScrappy and see what everyone else is up to in orange.

Have you heard of the new BOW by Barbara Brackman? It is called Grandmothers choice and will detail the efforts in gaining the right to vote for women in the US and across the world. It starts today and runs for 49 weeks. I think I am joining in and will do the green/purple and white colorway as I have a bunch of those fabrics in my stash. Anyone else joining in?

As for me.... I have a sick boy today so there will be lots of cuddling on the couch and video's for him to watch. Hopefully he'll nap a bit this afternoon with his sister so I can get some things done. At least at 4 he know's when he is going to throw up and can usually make it to the bathroom in time.... except for the one time last night when he got me and the couch. Thank goodness for the steam vacuum! Hope you all have a happy and healthy weekend on this holiday.
Posted by Deb A at 7:27 AM

Sorry to hear that you have a sick little boy. Must be all those new germs from preschool. Hopefully he won't share with everyone in the house. I saw the block of the week, Kathy from Kathy quilts is doing it. I will resist this time, but it will be fun to see yours.

I'll be making more coffe cups this month with orange "scraps". YOu have some fun scraps to work with this month.

I'm doing Grandmothers choice in purple, green and beige. I've already got the fabrics picked out for block 1!

Sorry to hear your son is sick. Hope he will bounce back real soon!
Love your oranges... so pretty. Can't wait to see your block.
I'm passing on the Grandmother's Choice QAL. Just tooooo much stuff on my plate right now. But I'll be watching and rooting you on!

I sure hope he feels better soon! I hate when the kids are sick.

Oh, I just love orange! It is one of my favorite colors, that and brown.

I am also going to do the Grandmother's Choice BOW! I will probably do it in the Gr/pu/wh too. I have been gone all day and just too tired to even think about sewing a block tonight, so I will probably try to get it done tomorrow after Church.

Have a wonderful and Blessed day
Kristie